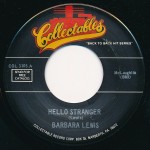 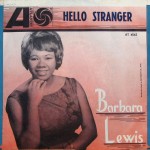 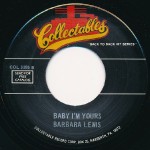 During a time when most recording artists were told what to record, especially women, Barbara Lewis wrote almost all of the songs on her debut album called Hello Stranger. The hit title song was recorded at Chess Studios in Chicago with backup vocals provided by The Dells. Inspiration for the song came from performing shows with her musician father. Lewis: ““I would make the circuit with my dad and people would yell out: ‘Hey stranger, hello stranger, it’s been a long time’”. (Complete Atlantic Singles liner notes.)

The magic in this track lies in Lewis’ feathery-light delivery atop the heavenly harmonious shoo-bop-shoo-bops in the background, and one of the all-time greatest roller-rink Hammond organ introductions ever on record. It’s no wonder that the “Hello Stranger” single climbed to #3 on the pop charts and topped the R&B charts in 1963.

Lewis’ soul classic has spawned numerous covers over the years. Yvonne Elliman topped the easy listening charts and brought the song into the top-twenty of the pop charts in 1977, Carrie Lucas charted in the R&B top twenty in 1985, The Capitols’ version gained wide exposure as the B-side to their hit single “Cool Jerk,” and Martha And The Vandellas, The Supremes & The Four Tops (together) and Queen Latifah have also given the song a go in the studio.

The flip of today’s reissue single is “Baby I’m Yours,” which was written by Van McCoy. McCoy is best known for the disco smash, “The Hustle” which topped of the charts in 1975, and it is his voice that is heard on the track as part of the choir. Lewis brought the song to the #11 position on the pop charts and #5 R&B in 1965.

She initially did not like the song and gave a lackluster vocal performance of it in the studio in the hopes that it would end up shelved. After the session, producer Ollie McLaughlin told her that she needed to re-record her vocals. McLaughlin chided her into giving the song a winning performance. Lewis: “He said ‘You know, Barbara, Karen can sing that song better than you.’ That was his little daughter. And it pissed me off. I did one more take, and that was the take that they selected.” (Complete Atlantic Singles liner notes.)

The song also went on to become a country hit for Debby Boone and Jody Miller. Peter & Gordon brought the song to #19 on the UK Pop charts in 1965, and Cher, Cilla Black, Petula Clark, Maureen McGovern, Billy Preston and British band The Arctic Monkeys have recorded the song.