You are here: Home / Music / Alternative / Song Of The Day by Eric Berman – “The Trouble With Candyhands” by Deerhoof 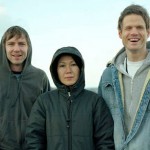 Emanating from San Francisco (Greg Saunier & John Dieterich) by way of Japan (Satomi Matsuzaki), Deerhoof have released 12 albums of unpredictable music with a sound that would have made Yoko Ono proud and John Lennon jump for joy. It has finally come to pass that the ingredients of Yoko Ono’s recordings circa “Double Fantasy” that were championed by John Lennon have somewhat reached the mainstream with Deerhoof and their brand new release “Breakup Song.” Part electro-crunch, part sing-song melodies, part twee vocals and completely infectious in the dance rhythm department, “The Trouble With Candyhands” is a prime example of this band’s unique and irresistible sound.