You are here: Home / Music / Classic Rock / Song Of The Day by Eric Berman – “Wounded” by The Cookies 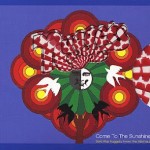 The Cookies began life in the 1950s consisting of Margie Hendrix, Ethel “Earl-Jean” McCrea and Pat Lyles and recording for Atlantic Records. Their work as backup vocalists on the label led them to become members of Ray Charles’ Raelettes. By 1962, Hendrix began working with a new version of the group featuring Dorothy Jones and Margaret Ross taking the place of Hendrix and Lyles. It was this version of the group that recorded the Carole King/Gerry Goffin hits “Chains” (later covered by The Beatles) and “Don’t Say Nothin’ (Bad About My Baby)” for the Dimension label in the early 1960s. By the time they were brought to Warner Bros. Records by The Tokens in 1967 to record this great single, the only member left of the early ’60s lineup was Dorothy Jones. Jones died in December 2010, but this great slice of Power Pop that wouldn’t have felt out of place on a Bangles album still lives on. You can find this track on Andrew Sandoval’s wonderful “Come To The Sunshine” compilation of Soft Pop Nuggets from the Warner vaults that was released as a limited edition Rhino Handmade CD back in 2004. It’s a collection that is well worth seeking out!