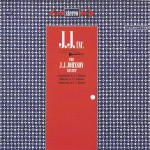 By the time of the 1960 sessions that resulted in the album “J.J. Inc.” (and today’s Song Of The Day), J.J. Johnson had been an established figure in Jazz for about 18 years, having already played with the likes of Miles Davis, Benny Carter, Count Basie, Max Roach, Elvin Jones and Charlie Parker. By this time, he had also released a very successful series of recordings with fellow trombone player, Kai Winding, under the moniker “Jay and Kai.” (The duo would continue to record together on and off into the 1980s.)

Johnson was as well known for his composing as he was for his trombone playing, creating large-scale works that melded classical and jazz music together. His six movement suite called Perceptions became a cornerstone composition of The Third Stream movement in Jazz. (A loose-knit group of musicians and composers including Duke Ellington, George Gershwin , Aaron Copeland and Leonard Bernstein, who wrote music that combined elements of jazz and classical music.)

The Sextet on this album consisted of a group of then-up and comers including Freddie Hubbard on trumpet, Clifford Jordan on tenor sax, Cedar Walton on piano, Arthur Harper on bass and Albert “Tootie” Heath. Johnson not only plays the trombone on the date, but also wrote, arranged and conducted the session. Check out Johnson’s relentlessly swinging soloing on this track backed by an air-tight rhythm section of bass, drums and piano.

By the 1970s, Johnson moved west to Hollywood (urged on by Quincy Jones) and began scoring movies including the classic soundtracks to the Blaxploitation flicks “Across 110th Street” and “Cleopatra Jones.” He also had success writing music for television including stints writing for the series “Starsky and Hutch” and “The Six Million Dollar Man.”

After a long break away from performing, in which he cared for his ailing wife, Johnson returned to performance from the late 1980s through the late 1990s. He was diagnosed with prostate cancer and committed suicide by a self-inflicted gunshot wound on February 4, 2001.

In the liner notes for the CD reissue of this album, contemporary jazz trombonist Steve Turre sums up Johnson’s influence this way: “He did for trombone what Charlie Parker did for saxophone. He brought the trombone into the modern world with a unique conception that affected all those who came after him and set the standard that is yet to be matched.”