You are here: Home / Music / Big Band / Song Of The Day – “Friendship” by Louis Jordan & His Tympany Five 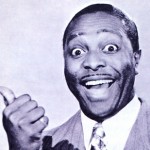 Some stone cold advice from Mr. Jordan and company waxed back in 1947.

It’s all here on this track…the roots of rock ‘n’ roll…rap…and comedy all rolled up into one tall tale of hilarity. That’s Wild Bill Davis on the piano and, of course, Jordan himself on the vocals. When it came to big band, jump blues, jazz and boogie woogie, Jordan was top of the heap ranking just behind Duke Ellington and Count Basie in popularity back in the day.

Louis Jordan was an accomplished songwriter, saxophone player and entertainer.  His first big gig was playing sax and singing with the great Chick Webb Orchestra.  After striking out on his own, he landed 57 hits on the R&B charts including “G.I. Jive,” “Choo Choo Ch’Boogie,” “Saturday Night Fish Fry,” “Ain’t Nobody Here But Us Chickens,” “Buzz Me,” “Beans And Cornbread” and many others leading to his being dubbed “King Of the Jukebox.”

Jordan fronted his own band for over twenty years. His unbridled charisma led to features in many films with his band The Tympany Five, allowing us the pleasure of seeing him in action today.

I recently acquired a 5 CD set on the JSI label featuring 131 of his recordings…that’s over six hours of Jazz, Jump and Jive!