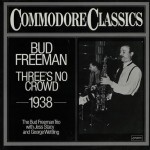 The other day I was pondering about the lack of Jazz clarinetists in today’s Jazz landscape which got me on a clarinet binge here at the homestead, which in turn led me to Bud Freeman. Chicago’s own Bud Freeman got his start on the clarinet before switching over to the tenor saxophone where he became one of the most important instrumentalists of the Big Band Era. Freeman’s early fame and his resultant nickname “The Eel” came via the recording of a tune called “The Eel” with Eddie Condon’s band that caused a sensation with its ever-winding soloing. By the time of the recording of this Gershwin favorite in 1938, Freeman had left the ranks of the Tommy Dorsey Orchestra and joined Benny Goodman’s band for a spell before forming his own Suma Cum Laude Orchestra in 1939. This recording is from a session that took place on January 17th, 1938 with Jess Stacy on piano and George Wettling on drums. What strikes me about this recording is the inventive drumming on Wettling’s part and the positively rollicking piano playing of Jess Stacy while Freeman lays out on the tenor sax. His reentry into the song propels it to a whole new level. I pulled this from a Commodore Records album I have featuring sixteen recordings from January through November 1938 by this group. The album was released in 1979 under the title “Three’s No Crowd,” and the performances therein are nothing short of stunning in their interplay and high level of musicianship. The album was produced the legendary Milt Gabler, the owner of the Commodore Record who produced everybody from The Andrews Sisters (“Rum And Coca-Cola”) and Billie Holiday (“Lover Man”) to Bill Haley & His Comets (“Rock Around The Clock”) and Brenda Lee (“I’m Sorry”).