You are here: Home / Music / Alternative / Song Of the Day – “Mother People” by The Mothers Of Invention 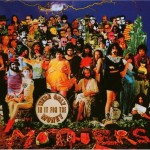 Every Christmas Eve through Christmas morning I manage a homeless shelter in an area church. It gives the regular workers a night off on their holiest of holidays, and it is something that I find very rewarding. Inevitably every year, I either get home after, or someone comes up to me during the 15 hour shift to tell me of some celebrity who has passed. So it was that I came home today, not only to the news that we lost the great actors, Jack Klugman and Charles Durning, but we also lost Ray Collins of The Mothers Of Invention.

Collins was the lead vocalist for the Mothers on their first four albums “Freak Out,” “Absolutely Free,” “We’re Only In It For The Money” and “Cruisin’ with Reuben And The Jets.” Today’s song of the day comes from the Mother’s album “We’re Only In It For The Money” (1968) which was a parody of the flower-power movement of the late 1960s. Ray Collins left the Mothers temporarily during the recording sessions for this album, only to rejoin in time for the “Cruisin’“sessions that took place at the same time.

Now, back to the homeless shelter…it was also six years ago, while managing the shelter on Christmas Eve, that I was told the sad news that James Brown had died. Being that a large part of the guest population at the shelter that year was African American, I felt it behooved me to break the news that “The Godfather Of Soul” had perished during the night during the guests’ morning cigarette break, for which I was the chaperone.

What ensued was one of the liveliest and most loving musical conversations I’ve ever been a party to, as we discussed our favorite James Brown songs, moves and performances, from an artist that certainly touched all of our lives. Just goes to show, that no matter what your economic or ethnic background, music is something we all share and have in common! Peace On Earth!