You are here: Home / Music / Alternative / Song Of The Day – “My God Is The Sun” (Live On Letterman) by Queens Of The Stone Age 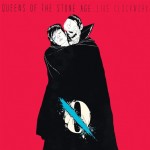 I wrote about Queen’s Of The Stone Age’s latest album …Like Clockwork several weeks ago proclaiming it as one of the best of the year, and I’ve been playing it incessantly since its release. There are so many great tracks on this album, that I’ve chosen another song to run with my original piece. I am very much looking forward to seeing QOTSA’s set next weekend at Lollapalooza…

And the album is chock full of classic sounding rock goodies including “I Sat By The Ocean,” which features a “…like clockwork” precision backbeat courtesy of Joey Castillo, the quasi-psychedelic stoner sludge opener “Keep Your Eyes Peeled,” and the riff-happy “My God Is The Sun.”