You are here: Home / Music / Big Band / Song Of The Day – “Rhapsody In Blue” by Paul Whiteman & His Orchestra 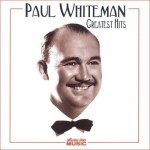 Whiteman recorded the piece twice. The original was recorded in 1924 acoustically with Gershwin playing the piano parts and released on Columbia Records. He recorded the piece a second time in 1927 electrically. That recording, released on the RCA Victor record label, was inducted into the Grammy Hall Of Fame in 1974. For today’s Song Of The Day, I’ve chosen the original recording with Gershwin on piano. There is also some great footage of Whiteman and the Orchestra performing this piece from the 1930 film King Of Jazz. Whiteman’s orchestral approach to Jazz on “Rhapsody” was a big influence on Miles Davis and Gil Evans and their seminal recordings Birth Of The Cool, Porgy And Bess and Sketches Of Spain.