You are here: Home / Music / British Invasion / Song Of The Day – “Fox On The Run” by Sweet 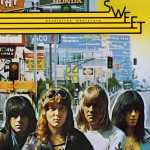 Boy, I hated this song when it was a huge hit back in 1975. It stood for everything I disliked about commercial rock ‘n’ roll. The band was totally lightweight and poppy, and their brand of glam rock had no teeth like that of David Bowie, Lou Reed and Mott The Hoople.

But a funny thing happened on the way to reaching the tender age of 52, I became nostalgic for the band and the song.

I’ve written about nostalgia before and I’ve come to the conclusion that the songs we feel most nostalgic for today, are the songs that were most reviled by the critics when they were new, and equally loved by the everyday radio listening fan. Many of them also had some kind of novelty value as well.

They were all played to death on radio to the point where even fans of the songs never wanted to hear them again, and many of them were co-opted by Madison Avenue for use in TV commercials in subsequent years after their run on the charts.

Such is the case for me when it comes to Sweet’s single “Fox On The Run” and the Desolation Boulevard album from whence it came. The band consisted of Brian Connolly on vocals, Steve Priest on bass, Andy Scott on guitars and Mick Tucker on drums, and most of the album’s tracks were written by Mike Chapman and Nicky Chinn.

The roots of Sweet go back to the late 1960s when Connolly and Tucker were introduced to two aspiring songwriters Mike Chapman and Nicky Chinn by their former producer Phil Wainman.  The group recruited Steve Priest whom they had already worked with on bass and Andy Scott on guitar. Together, the band began recording records in the mold of bubblegum groups of the late 1960s who were at the height of their popularity.

On a side note, Chinn and Chapman went on to write and/or produce hit records for the Chrysalis Record label including “Hot Child In The City” for Nick Gilder, the Bondie albums Parallel Lines Eat To The Beat, Autoamerican and The Hunter in which Chapman wrote many of their hits, Get The Knack by The Knack including the hit “My Sharona,” Tina Turner’s “The Best” and “Better Be Good To Me,” Pat Benatar’s “Love Is A Battlefield” and production on albums by Divinyls, Rod Stewart, Lita Ford and many others.

After signing a record deal with RCA in the UK and Bell in the U.S., they began recording albums leading to thirteen top twenty UK hits including “Little Willie,” “Block Buster,” Funny Funny,” “Co-Co,”  “Poppa Joe” and “Wig-Wam Bam.” The only single that made any impact on U.S. shores was “Little Willie” which climbed to #3 on the Billboard charts in 1973.

Today’s Song Of The Day was released as a single in 1974 in Europe, and then remixed and re-released the following year in the U.S.  It was subsequently covered by the likes of Red Hot Chili Peppers, Girlschool, Ace Frehley (of Kiss) and the Scorpions who recorded it in German. The Desolation Boulevard album also included the big hit “Ballroom Blitz” (another single I hated back then…and pretty much still hate now) and glam-tastic album tracks like “The Six Teens,” “Sweet F.A.” and “AC DC.”

It’s hard for me to imagine why I totally ignored records by Sweet, Kiss and Bad Company back in the day because they sound so good to me now. The only excuse I could come up with is that they just didn’t seem to be as “weighty” as records like Lou Reed’s Rock ‘n’ Roll Animal, David Bowie’s Diamond Dogs, Led Zeppelin’s Physical Graffiti, John Lennon’s Walls And Bridges and Mott The Hoople’s Mott, to name but a few.