You are here: Home / Music / Big Band / Song Of The Day – “The Nicest Things Happen” by Herb Alpert & The Tijuana Brass 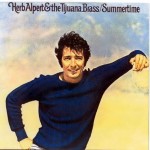 By 1971, the non-stop run of hit albums and singles by Herb Alpert & The Tijuana Brass was becoming a distant memory.  In fact, Alpert was more intent on producing other artists and running his mega-successful A&M record label than going into the studio to record new material, especially if it was under the Tijuana Brass moniker.

However, the Tijuana Brass brand was a potent one, and there was still great demand for more product. So a compilation of singles and previously unreleased off cuts was assembled to meet the demand of the masses. While the resultant album is nowhere near the greatness of albums like Whipped Cream, Going Places or SRO, the Summertime release does have several tracks that would sit comfortably next to anything on those aforementioned classics.

Case in point is today’s Song Of The Day, the warm and pastoral “The Nicest Things Happen.” The song was written by Julius Wechter (with his wife Cissy) who was the writer responsible for several indelible Tijuana Brass hits including “Spanish Flea” and “Brasilia.” In the spectrum of great easy listening instrumentals, this one is every bit as good in creating a pleasing mood as “Pet Sounds” by Brian Wilson (The Beach Boys), “Theme From A Summer Place” by Percy Faith, “Quite Village” by Martin Denny and The B-52’s “Follow Your Bliss.”

The album’s title track pointed in the direction Alpert would take in the future, leaning farther into the jazz idiom with an arrangement of the Gershwin classic from Porgy And Bess inspired by the recordings of Miles Davis, Lambert Hendricks & Ross, and Ahmad Jamal. It is also the first Tijuana Brass track to feature vocals by Alpert’s wife and Sergio Mendes & Brasil 66 member, Lani Hall.

Rounding out the album are TJB takes on current pop tunes of the day including versions of The Beatles’ “Martha My Dear” (marred by Alpert’s flat vocals), Gordon Lightfoot’s “If You Could Read My Mind,” a spirited take on The Beach Boys’ “Darlin’,” and a great version of Little Anthony & The Imperials’ “Hurt So Bad.” And no Tijuana Brass album would be complete without a few nostalgic gems thrown in for good measure, including a version of Perry Como’s “Catch A Falling Star” and another Gershwin classic, the rousing march “Strike Up The Band.”

The only other track of note on this album is “Montezuma’s Revenge,” which was written by Sol Lake who was also responsible for writing the TJB classics “The Lonely Bull,” “The Mexican Shuffle” (aka “The Teabury Shuffle”), “More And More Amor” and “Bittersweet Samba.”

Summertime closes the era of Alpert recording pure pop confections. It was also the last album to carry the Tijuana Brass name. His next album of all new material, You Smile, And The Song Begins, followed three years later and was credited to Herb Alpert & The TJB. It was also the beginning of the next phase of his career, finding Alpert leaving pop music behind and recording more straight ahead jazz albums.