You are here: Home / Archives for Broadway Musicals 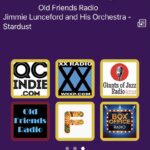 New features, new stations. With the release of update 2.1 to InternetFM app, our listeners who register on the app can now refer their friends using a personal referral code. Each code is unique to that listener, and you can even keep track of how many of your friends register as well. This will also enable us to offer incentives to get more signups. In … END_OF_DOCUMENT_TOKEN_TO_BE_REPLACED

For Earth Day, here's a song that is as relevant today as it was back in 1968 when it made its debut in the Broadway musical "Hair." Written by Gerome Ragni and James Rado on the lyrics and hipster musician Galt MacDermot on the music, "Hair" was originally billed as "The American Tribal Love-Rock Musical." MacDermot also wrote the music to the 1971 musical "Two Gentlemen Of … END_OF_DOCUMENT_TOKEN_TO_BE_REPLACED