You are here: Home / Archives for Capitol Theater 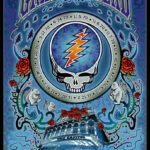 6/24/70 The Capitol Theatre, Port Chester, NY Content Reprinted courtesy of Ric Rabinowitz, Artwork by Mike DuBois We have talked about Good Dead Shows, Great Dead Shows and the legendary Dead Shows.... well 6/24/70 is a MAGICAL Dead Show!!!!! A show with an all time great DarkStar that exists in three parts segueing in and out of other songs to create a DarkStar suite … END_OF_DOCUMENT_TOKEN_TO_BE_REPLACED

It was a tale of two Jerries. By 1980 Jerry Garcia had his day job with the Grateful Dead. During that year, the band released the somewhat weak studio album, Go To Heaven, and took to the road to promote it. While the 1979-1980 shows generally found the band in excellent form, in order to keep things interesting for the fans and themselves, they performed some very special … END_OF_DOCUMENT_TOKEN_TO_BE_REPLACED