You are here: Home / Archives for Charles Tillman 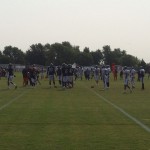 The Chicago Bears are coming into the 2014 season with huge expectations in the NFC, mainly because they have a healthy Jay Cutler and an impressive set of weapons that can get it done through the air and on the ground. However once again on Friday the defense stole the show and made the offense look sluggish at times. Because of possible storms in the area, practice was cut … END_OF_DOCUMENT_TOKEN_TO_BE_REPLACED

The Chicago Bears spent this offseason adding playmakers on the defensive side of the ball, including the No.14 overall pick in the 2014 NFL Draft, Kyle Fuller, who instantly became a fan favorite on the opening day of practice in Bourbonnais. Fuller intercepted both Jordan Palmer and Jimmy Clausen during an 11-on-11 scrimmage Friday. However, what was even more impressive … END_OF_DOCUMENT_TOKEN_TO_BE_REPLACED

from the SRN News wires LAKE FOREST, IL – The Chicago Bears had five players selected to the 2012 Pro Bowl this season: LB Lance Briggs, RB Matt Forté, ST Corey Graham, CB Charles Tillman and LB Brian Urlacher. The five Pro Bowl selections for the Bears are the most for the team since having eight players named to the Pro Bowl following the 2006 season. This is the seventh … END_OF_DOCUMENT_TOKEN_TO_BE_REPLACED