You are here: Home / Archives for Dallas Mavericks 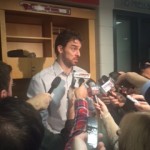 The highest scoring team in the NBA, the Dallas Mavericks, were the spoilers for the Bulls homecoming after a 4 – 3 circus trip. The Mavs (13-5) and Bulls (11-6) were evenly matched as they played like playoff bound teams from their respective conferences. The first quarter flew by with each team shooting 20+ shots and over 40% from downtown and when the dust settle the Bulls … END_OF_DOCUMENT_TOKEN_TO_BE_REPLACED

Nolan Block and I continue on our quest to unveil each NBA team's New Year's Resolution. In Part 1, we looked at the underwhelming Eastern Conference. Part 2 looks into the Western Conference from bottom to top. Utah Jazz- Acquire a Franchise Player Nolan- On paper, the Utah Jazz are not the worst team in the league. They have assembled a team that looks like they are … END_OF_DOCUMENT_TOKEN_TO_BE_REPLACED