You are here: Home / Archives for James Sheppard 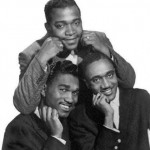 Song Of The Day by Eric Berman – “Daddy’s Home” by Shep & The Limelites Shep & The Limelites consisted of James “Shep” Sheppard, Clarence Bassett and Charles Bakersfield. They formed in Queens, New York in 1960 and are primarily remembered for their signature hit (and today’s Song Of The Day) “Daddy’s Home.” Sheppard was originally a member of a group called The … END_OF_DOCUMENT_TOKEN_TO_BE_REPLACED