You are here: Home / Archives for Jerry Fuller 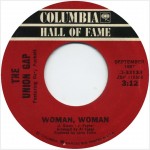 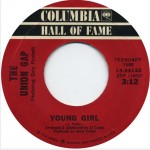 Today’s jukebox single features two songs with perfect trebly production that sound great coming out of the jukebox speakers, and if memory serves me right, even better pouring out of the mono speaker of the GE transistor radio I had as a kid. Gary Puckett and the Union Gap scored numerous hits during a short period in the late sixties including “Woman Woman,” “Lady Willpower,” and “Young Girl,” featuring horn-soaked arrangements and plaintive soulful vocals.

Gary Puckett was born in Hibbing, Minnesota, the same town that gave us Bob Dylan. He cut his teeth in a band called The Outcasts with band mates Kerry Chater on bass, Gary “Mutha” Withem on keyboards, Dwight Bement on saxophone and Paul Wheatbread on drums. They released two singles that went absolutely nowhere.

In 1967, the band renamed themselves The Union Gap, from the town Puckett grew up in, Union Gap, Washington which was also the site of the famous Battle of Fulbright Park during the Civil War. As a result they began to wear Civil War uniforms at performances. They also furthered the gimmick by taking on ranks. (Puckett was a general, while Whitbread and Withem were privates, etc.).

After hearing their demo, the band was signed by A&R man Jerry Fuller at Columbia Records on the strength of Puckett’s earthy voice. Their debut single was “Woman Woman,” which sold over a million copies and climbed to the #4 position on the pop charts in 1967. The song was written by Jimmy Payne and Jim Glaser (of 70s country artists Tompall and The Glaser Brothers) and covered by the likes of Glen Campbell, Engelbert Humperdinck, The Lettermen and big band legend Ted Heath.

Their follow-up hit was the song featured on the flip of today’s double A-sided single “Young Girl” which climbed to #2 on the charts in 1968.  “Young Girl” was written by Jerry Fuller (who also wrote their hits “Lady Willpower” and “Over You,” as well as Ricky Nelson’s “Traveling Man”).

The song came off innocently enough back in 1968, but today sounds somewhat creepy. Fuller:  “I was on the road a lot as an artist, fronting various groups for many years. I guess every entertainer goes through a time when 14-year-olds look like 20-year-olds. That’s somewhat of an inspiration not from my own experience, just knowing that it happens.” (1000 UK #1 Hits) “Young Girl” was also covered by Gary Lewis and the Playboys and Frida (aka Anni-Frid Lyndgstad) of ABBA.

Fuller was responsible for their magically crafted sound that fit in perfectly on radio playlists along with then current hits by Blood Sweat and Tears and The Chicago Transit Authority. In 1969, they were nominated for the Best New Artist Grammy, but lost out to Jose Feliciano. The group soon grew restless with the middle-of-the-road pop power ballads that Fuller was providing for them to record and Puckett wanted to take the group in a different direction.

Things came to a head when they were to participate in a session Fuller booked for them with a full blown studio orchestra. Puckett and the group refused to record the song and the session was canceled, ending their relationship with Fuller…and their run of big hits at Columbia Records. Puckett then embarked on a largely unsuccessful solo career and by 1972 he found himself without a recording contract.

In 1981, Puckett resurrected The Union Gap and ever since they have been regulars on the oldies circuit. His most recent album is a holiday collection in 2001 called The Gary Puckett Christmas Album. The current Union Gap lineup consists of Woody Lingle on bass, Jamie Hilboldt on keyboards and Mike Candito on drums. 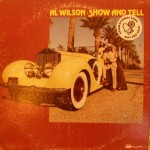 Today’s Song Of The Day is the signature hit by soul great Al Wilson. While Wilson is closely identified with the song, he wasn’t the first artist to record this classic hit. That honor went to none other than Johnny Mathis, who recorded it in 1972, a year before Wilson took it to the charts.

Al Wilson spent his formative years kicking around San Bernardino, California working odd jobs, singing in soul groups and developing comedy routines with an eye towards a career in entertainment, before joining the Navy and singing in the enlisted men’s chorus.

After two years in the Navy, Wilson relocated to Los Angeles and signed with manager Marc Gordon who got him an audition with Johnny Rivers who ultimately signed him to his Soul City record label. Rivers produced the session that resulted in the Northern Soul classic “The Snake” that made it up to #27 on the pop charts in 1968. Several other minor chart singles followed on the Soul City imprint including a cover of Creedence Clearwater Revival’s “Lodi” which reached the #67 position on the charts.

By 1973, Wilson was signed to the Rocky Road record label, a subsidiary of Bell Records, where he released the album Show And Tell and its title hit single which sold over 2 million copies. The song was ultimately named the Number One Single Of the Year in 1973 by Cashbox. Most of the songs on the album (including the title hit) were written by Jerry Fuller.

Jerry Fuller was known for writing the Ricky Nelson hits “Travelin’ Man,” “A Wonder Like You,” “Young World” and “It’s Up To You.” He also discovered Gary Puckett & The Union Gap and wrote their hits “Lady Willpower,” “Young Girl” and “Over You,” plus he also wrote and produced hits for The Peanut Butter Conspiracy, O.C. Smith (“Little Green Apples”) and The Knickerbockers (“Lies”).

Wilson’s follow up single from 1974, “The La La Peace Song” made it into the top twenty of the R&B charts, but suffered by a competing version by O.C. Smith that was also climbing the charts at the same time. Two years later, Wilson scored a #3 R&B single with “I’ve Got a Feeling (We’ll Be Seeing Each Other Again)” which also made it into the top thirty of the pop charts. His final chart single was “Count The Days” in 1979.

Wilson continued performing in clubs and soul reviews for the next 25 years, long after the hits stopped coming.  In 1989, Peabo Bryson took “Show And Tell” to the top of the R&B charts, and in 2007 Wilson lost many of his original master tapes when his home recording studio burned down. Wilson died in April of 2008 of kidney failure at the age of 68.

I posted this ear worm of a song the other day sans commentary for laughs, and I haven’t been able to get it out of my head since…such is the stuff that makes a hit record, an everlasting hit record…

2020 and 2019: Thanks to everyone who continues to support us. The current licensing to legally play all the music you hear on Acid Flashback costs almost $2000 a year. Please help us defray this and other costs with a donation of any amount. … END_OF_DOCUMENT_TOKEN_TO_BE_REPLACED