You are here: Home / Archives for Jimmy Butler 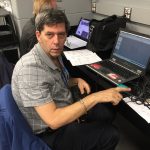 with Packer Dave and Steve Leventhal We are loaded with guests today as Les Grobstein from Sports Radio 670 in Chicago dishes on the Bears, Bulls, Cubs, and White Sox. Plus, Dave Eanet, play-by-play announcer for Northwestern football and basketball on WGN Radio, gives us his take on the Wildcats' hoops season. John Poulter continues his preseason MLB previews with the … END_OF_DOCUMENT_TOKEN_TO_BE_REPLACED

Being a Chicago Bulls fan in 2016 is probably a confusing feeling. It seems like just a season or two ago that Derrick Rose, the Prodigal Son of Chicago, was leading a gritty, defensive beast of a team straight towards a maybe mortal LeBron James. Then we all know what happened with Rose’s health, and the team understandably fell out of contention in his absence. But even as … END_OF_DOCUMENT_TOKEN_TO_BE_REPLACED 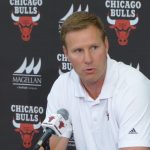 New Faces Its a new season in Chicago, and with it comes some new faces, Rajon Rondo has replaced Derrick Rose, Robin Lopez has replaced Joakim Noah, and of course, Dwayne Wade signed a 2 year $47.5 million with the Bulls to be their new starting shooting guard. Yes, I am not used to him in this uniform yet either. Fred Hoiberg enters his second season as Bulls … END_OF_DOCUMENT_TOKEN_TO_BE_REPLACED

As the Bulls hear into a new season, they truly are looking for a "fresh start." With the hiring of a new coach in Fred Hoiberg and the return of healthier versions of Taj Gibson, Derrick Rose (in a couple weeks), and Joakim Noah, the club hopes to forget their playoff woes brought to them from that … END_OF_DOCUMENT_TOKEN_TO_BE_REPLACED

“Next man up” has become the slogan for the Chicago Bulls for about three years now. Ever since Derrick Rose tore his ACL in the 2012 playoffs, head coach Tom Thibodeau has been forced to change his lineup more than any other coach in recent memory. Not only have the Bulls had to deal with injuries to Rose the past few seasons, Joakim Noah, Taj Gibson, and Kirk Hinrich are … END_OF_DOCUMENT_TOKEN_TO_BE_REPLACED