You are here: Home / Archives for Jose 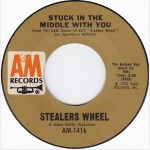 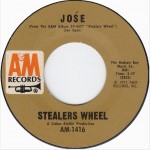 Some songs are forever changed by the movies that they appear in. For instance, Roy Orbison’s rather innocuous “In Dreams” took on a more sinister tone when it was used by David Lynch in the film Blue Velvet, forever changing the hue of the song for all of those who saw the movie. And one can’t help but feel the pain and helplessness of the police officer in the sadistic torture scene of Quentin Tarentino’s film Reservoir Dogs when listening to today’s jukebox classic, “Stuck In The Middle With You” by Stealers Wheel.

Tarantino: “That was one of those things where I thought [the song] would work really well, and [during] auditions, I told the actors that I wanted them to do the torture scene, and I’m gonna use ‘Stuck in the Middle With You,’ but they could pick anything they wanted, they didn’t have to use that song. And a couple people picked another one, but almost everyone came in with ‘Stuck in the Middle With You,’ and they were saying that they tried to come up with something else, but that’s the one. The first time somebody actually did the torture scene to that song, the guy didn’t even have a great audition, but it was like watching the movie. I was thinking, ‘Oh my God, this is gonna be awesome!'” (Rolling Stone)

The song was written by Gerry Rafferty and Joe Egan who formed the group Stealers Wheel in Scotland. The hand-clappy folk-bubblegum confection was released on Stealers Wheel’s 1972 self-titled debut album which was recorded at The Beatles’ Apple Studios at 3 Saville Row in England and engineered by Beatles’ engineer Geoff Emerick. The album and today’s jukebox single were produced by legendary songwriters Jerry Lieber and Mike Stoller and the single reached the #6 position of the US Hot 100 charts in 1973, selling well over a million copies. The group consisted of Gerry Rafferty, Joe Egan, Paul Pilnich, Tony Williams and Rod Coombes.

Rafferty left the band a few months after the debut album was recorded and was replaced by Luther Grosvenor (of Spooky Tooth), but with the success of the single, Rafferty was persuaded to rejoin the group.  Rafferty: “I was going through a very strange period in my life right then, I’d got married, had a child, I was twenty-four, and one day it was like I’d been living in a dream for six or eight years and suddenly I woke up. It was a pretty scary kind of feeling. Perhaps I was on the edge of a nervous break-down — that’s how it felt, anyway. I just had to get away, away from groups, managers, record companies, the whole thing. So I picked up and moved [from London] back to Scotland to sort myself out.” (Rolling Stone 8/24/78)

The group then became just Rafferty and Egan and whomever they chose to back them since Grosvenor, Pilnich, Williams and Coombes left upon Rafferty’s return. In the loopy, stoned-out video, Joe Egan is seen lip synching the song, however it was Rafferty who handled the vocal chores on the track.

The lyrics were written as a parody of a Hollywood cocktail party using the vernacular of Bob Dylan, and the song has seen covers by Juice Newton, Jeff Healey, Susanna Hoffs, Michael Bublé, Keith Urban, The Nitty Gritty Dirt Band and many others. The flip of the single is the polar opposite of its top side. While “Stuck” is an incredibly infectious poppy confection, José is a lowdown, bluesy rocker that was also taken from the group’s debut album.

Rafferty stuck in the middle of Stealers Wheel for two more albums before taking off for a solo career that gave us the smash hits “Baker Street” and “Right Down The Line” from his second solo album City To City, which earned the distinction of knocking the Saturday Night Fever soundtrack out of the top slot of the album charts in 1978. Rafferty continued to record music throughout the ‘80s, ‘90s and ‘00s until his alcoholism got the best of him. He succumbed to liver failure in January of 2011.

2020 and 2019: Thanks to everyone who continues to support us. The current licensing to legally play all the music you hear on Acid Flashback costs almost $2000 a year. Please help us defray this and other costs with a donation of any amount. … END_OF_DOCUMENT_TOKEN_TO_BE_REPLACED