You are here: Home / Archives for josh mcCown 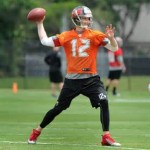 I really want this Bucs-Bears game to be played as soon as humanly possible… as if the Bears 4 – 6 record was not bad enough, the consistent yammering about Josh McCown and Lovie Smith is getting obnoxious. I get it… the Bears would be the defending Super Bowl champs if Lovie was still the coach and McCown was his quarterback. We have heard it all before, Lovie had a 10 … END_OF_DOCUMENT_TOKEN_TO_BE_REPLACED