You are here: Home / Archives for Kasabian 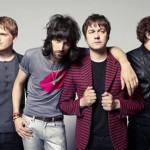 By Andrew David James ....Leicester’s finest Kasabian’s previous album, ‘West Ryder Pauper Lunatic Asylum’ was the band’s most successful to date. It was also bonkers, drawing together late-60s psychedelia, anthemic rock and a song named after a cleaning agent. It was very well named. So where to go from there? All the signs are that the boys are well-placed to fill the void … END_OF_DOCUMENT_TOKEN_TO_BE_REPLACED