You are here: Home / Archives for Mark Trestman 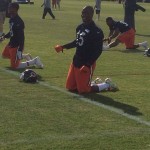 After two days of shorts and helmets, The Chicago Bears put the pads on and went to work on Sunday in front of an estimated 9,500 fans at Olivet Nazarene University in Bourbonnias IL. While you would figure the highlight of the day would have been a big hit, or even a nice block, the biggest ovation from the crowd actually came from a punter. Bears' rookie punter, Pat … END_OF_DOCUMENT_TOKEN_TO_BE_REPLACED 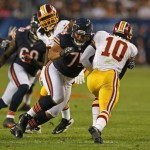 The Chicago Bears have seen the standings and are aware that the Washington Redskins have gotten off to a 1-4 start and are 0-2 at home. They have also seen the stat sheets and  have heard the critics say Robert Griffin III is not the same player since having surgery to repair a torn ACL this offseason. However, Lance Briggs believes the rust is wearing off for RG3, and last … END_OF_DOCUMENT_TOKEN_TO_BE_REPLACED 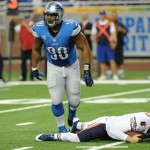 The first three games of the season, the Bears had 11 takeaways which were converted into 44 points, tops in both categories this season in the NFL. Sunday in Detroit, the shoe was on the other foot. The Lions scored 17 points off four Bears turnovers, which led to their 40-32 win at Ford Field. The turnovers were very costly and the Bears were not able to overcome … END_OF_DOCUMENT_TOKEN_TO_BE_REPLACED