You are here: Home / Archives for Martellus Bennett

on the Weekend Sports Report with Packer Dave and Steve Leventhal ....We are pleased to be joined by John Mullin from CSNChicago.com to preview the Bears - Chargers game Monday night, along with Jeff Rich to look at the Packers - Panthers game, which should be a Monday night contest.  Dave and Jeff look at the rest of the NFL lineup, while Steve and Jeff discuss the big games … END_OF_DOCUMENT_TOKEN_TO_BE_REPLACED 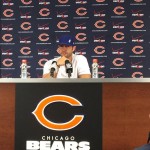 Two down, two to go. That's what the Chicago Bears have to be telling themselves after Thursday night's 20-19 win over the Jacksonville Jaguars. The team looked flat and (excluding the rookies and guys trying to earn a place on the roster) at times, disinterested. For the second straight week the Bears (2-0), could not establish the run early in the game. Matt Forte … END_OF_DOCUMENT_TOKEN_TO_BE_REPLACED

In 2013, the Bears were within one 4th down stop of reaching the playoffs. Instead, they finished a disappointing 8-8, and missed the playoffs for the third straight year. However, an already dangerous offense combined with a couple of solid defensive free agent signings, makes for one potential threat to take home the NFC North title. As training camp comes to a close this … END_OF_DOCUMENT_TOKEN_TO_BE_REPLACED

Martellus who? That is what fans were asking on Friday night when the Bears kicked off their 2014 preseason schedule at Soldier Field against the Philadelphia Eagles. Tight End Zach Miller made his debut in a Chicago Bears jersey in spectacular fashion, catching a 10-yard touchdown pass from Jay Cutler with 3:18 to play in the first quarter. Miller, who was filling in for … END_OF_DOCUMENT_TOKEN_TO_BE_REPLACED 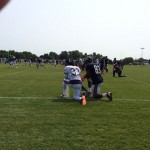 The Bears opened up practice on Tuesday with tight end Martellus Bennet nowhere to be found. Bennet had been involved in a fight with rookie defensive-back Kyle Fuller on Monday, after Fuller attempted to strip the ball from Bennet on what seemed like a harmless play. while fans and reporters wondered where the veteran was, Phil Emery called a press conference a few yards away … END_OF_DOCUMENT_TOKEN_TO_BE_REPLACED