You are here: Home / Archives for Marvin Gaye

1964, The Beatles Christmas Day Concert took place at the Hammersmith Odeon in London. The evening's events opened with The Mike Cotton Sound's performance of Georgie Fame's current single "Yeh Yeh," before singer Michael Haslam joined them to sing "Scarlet Ribbons." Next, The Yardbirds took to the stage followed by a pantomime sketch featuring The Beatles dressed as Antarctic … END_OF_DOCUMENT_TOKEN_TO_BE_REPLACED

1967, Rolling Stones guitarist Brian Jones was rushed to St Georges hospital in London after collapsing. A doctor reported Jones was tired and suffering from over strain and was also recovering from having some teeth out. 1968, Deep Purple played at the Grande Ballroom in Detroit, Michigan. 1968, Marvin Gaye scored his first number one single when "I Heard It Through The … END_OF_DOCUMENT_TOKEN_TO_BE_REPLACED 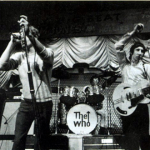 1965, The Who perform at The Marquee in London where they break box office records for the venue. 1966, "Mississippi" John Hurt, country blues singer and guitarist, died of a heart attack in his home state of Mississippi. Material recorded by him has been re-released by many record labels over the years and his songs have been recorded by Bob Dylan, Jerry Garcia, Beck, Doc … END_OF_DOCUMENT_TOKEN_TO_BE_REPLACED

1966, The Rolling Stones made their last appearance on UK TV Pop show Ready Steady Go! 1966, Johnny Kidd was killed in a car crash while on UK tour in Radcliffe, Manchester. He was 27. Kidd had the 1960 UK number one single "Shakin' All Over."  The Guess Who covered it in 1965, and the following year it became a number one hit in Canada, and a number twenty-two hit in the … END_OF_DOCUMENT_TOKEN_TO_BE_REPLACED

1966, The Who appeared at the Locarno Ballroon in Stevenage, England. This UK tour was notable for the addition of the single, "I'm A Boy" to the band's repertoire. 1968, Pink Floyd were forced to cancel a performance at the Chatelet Teenage Festival in Belgium due to work permit problems.  There were some violent reactions from the fans, but the several other bands, … END_OF_DOCUMENT_TOKEN_TO_BE_REPLACED