You are here: Home / Archives for Mike Dunleavy

As the Bulls hear into a new season, they truly are looking for a "fresh start." With the hiring of a new coach in Fred Hoiberg and the return of healthier versions of Taj Gibson, Derrick Rose (in a couple weeks), and Joakim Noah, the club hopes to forget their playoff woes brought to them from that … END_OF_DOCUMENT_TOKEN_TO_BE_REPLACED

“Next man up” has become the slogan for the Chicago Bulls for about three years now. Ever since Derrick Rose tore his ACL in the 2012 playoffs, head coach Tom Thibodeau has been forced to change his lineup more than any other coach in recent memory. Not only have the Bulls had to deal with injuries to Rose the past few seasons, Joakim Noah, Taj Gibson, and Kirk Hinrich are … END_OF_DOCUMENT_TOKEN_TO_BE_REPLACED 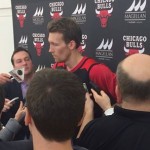 Since Tom Thibodeau has taken over as head coach of the Chicago Bulls, they have never been a team to look back and wonder, “What if?” --- not that anybody would blame them if they did. Two major knee injuries to Derrick Rose have robbed Chicago from a legitimate chance to compete for a title, and the Bulls again failed to land their main free agent target this offseason in … END_OF_DOCUMENT_TOKEN_TO_BE_REPLACED