You are here: Home / Archives for Oakland Raiders

1968 - The first ABA All-Star Game in Indianapolis. The East beats the West 126-120. 1977 - The Oakland Raiders defeated the Minnesota Vikings by the score of 32–14 to win their first Super Bowl. The game was played on January 9, 1977, at the Rose Bowl in Pasadena, California. Oakland gained a Super Bowl record 429 yards, including a Super Bowl record 288 yards in the first … END_OF_DOCUMENT_TOKEN_TO_BE_REPLACED

1920 - The New York Yankees paid the Boston Red Sox $125,000 for Babe Ruth 1971 In the NFC title game the Dallas Cowboys beat the San Francisco 49ers 17 -10,  and the Baltimore Colts previal over the Oakland Raiders 27-17 in the AFC. 2002 - The of Miami Hurricanes beat the Nebraska Cornhuskers 37-14 to win the National Championship, played at the Rose Bowl in Pasadena, … END_OF_DOCUMENT_TOKEN_TO_BE_REPLACED

The "Immaculate Reception." In 1972, occurred in the AFC divisional playoff game of the between the Pittsburgh Steelers and the Oakland Raiders of the NFL at Three Rivers Stadium in Pittsburgh. The Steelers were trailing in the last thirty seconds of the game. Pittsburgh quarterback Terry Bradshaw threw a pass attempt to John Fuqua. The ball bounced off the hands of Raiders … END_OF_DOCUMENT_TOKEN_TO_BE_REPLACED 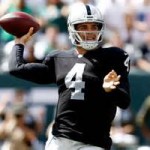 If only the Bears could have walked away at half time against the Seahawks last weekend in Seattle, but no… the NFL requires the teams to play 60 minutes which turned a 6 – 0 deficit at half into a 26 – 0 beat down. Even with their 0 – 3 record, there is a lot of Chicago faithful that believe the Bears season actually starts this week. Playing the Packers, Cardinals and … END_OF_DOCUMENT_TOKEN_TO_BE_REPLACED