You are here: Home / Archives for Ozzy Osbourne 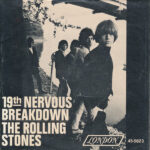 1963, The Beatles played at the Gaumont Cinema, Bradford on the opening night of the nationwide Helen Shapiro UK tour. The Beatles were at the bottom of the six-act bill playing just four songs, "Please Please Me," "Chains," "Keep Your Hands Off My Baby," and "A Taste of Honey." 1966, The Rolling Stones released "19th Nervous Breakdown." It peaked at number two on the … END_OF_DOCUMENT_TOKEN_TO_BE_REPLACED

1965, Working at Abbey Road studios in London The Beatles completed work on the new Paul McCartney song "Yesterday" with the overdubbing of an additional vocal track by McCartney and a string quartet. They also recorded "Act Naturally" for Ringo's vocal contribution on the Help! album and the song "Wait" in four takes. "Wait" will not be included on ‘Help!’, it was included on … END_OF_DOCUMENT_TOKEN_TO_BE_REPLACED

1967, Working on sessions for the new Beatles album Sgt. Pepper's at Abbey Road studios in London, John Lennon recorded his lead vocal for "Good Morning Good Morning," and Paul McCartney added a lead guitar solo to the track. Lennon had decided he wanted to end the song with animal sound effects, and asked that they be sequenced in such a way that each successive animal was … END_OF_DOCUMENT_TOKEN_TO_BE_REPLACED

1966, At a photo session with Bob Whitaker’s studio in London, The Beatles posed in white coats using sides of meat with mutilated and butchered dolls for the cover of their next American album, Yesterday and Today. After a public outcry, the album was pulled from stores and re-issued with a new cover. At the time, some of the Beatles defended the use of the Butcher photograph. … END_OF_DOCUMENT_TOKEN_TO_BE_REPLACED

I was a little more than intrigued about the prospect of seeing Black Sabbath at 2012 Lollapalooza. I was never a huge fan of the group, although I have become a fan of the group and their legacy over the years...even if it is with a hint of serious sarcasm thrown in. However, I've always loved this track and the Butthole Surfer’s song based on it called “Sweat Loaf.” It was … END_OF_DOCUMENT_TOKEN_TO_BE_REPLACED