You are here: Home / Archives for Paul & Linda McCartney 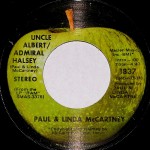 Lyrics were never his strong suit…and the lyrics from “Uncle Albert/Admiral Halsey” are at best incoherent. However, you’d be hard pressed to argue with the musical prowess of Paul McCartney especially on today’s Song Of The Day.

Today’s single was culled from Paul McCartney’s second solo album Ram, the only album in his vast catalog credited to Paul & Linda McCartney. The album was recorded in New York City with backing musicians David Spinozza on guitar, Hugh McCracken (who replaced Spinozza for the second half of the sessions) on guitar and future Wings member Denny Seiwell on drums.

The construction of “Uncle Albert/Admiral Halsey” picks up where the second side of The Beatles’ Abbey Road left off. Here we have McCartney dabbling in multi part suites of music, and the song is an amalgam of its many unfinished parts. McCartney wouldn’t perfect this way of song construction until “Band On The Run” two years later.

The song was inspired by Paul’s real Uncle Albert Kendall who married his Aunt Millie. Uncle Albert would habitually get drunk and then read passages from the Bible out loud. The admiral of the song was inspired by American Naval Admiral William “Bull” Halsey,” however Paul’s use of Admiral Halsey’s name was chosen because of the way it sounded and had nothing to do with who Halsey was or what he did.

The single was McCartney’s first chart topper away from The Beatles and it won the Grammy Award for Best Arrangement Accompanying Vocalists in 1971. It was never released as a single in the UK, where they got “The Back Seat Of My Car” instead as the first single. The song’s flugelhorn part was played by Jazz be-bop trumpet player Marvin Stamm who never met McCartney in person, as his parts were recorded in London and overdubbed onto the master in New York. The New York Philharmonic Orchestra was also brought in for the arrangement.

The flip of the single is “Too Many People” which is also the opening track on Ram. After the acrimonious split of The Beatles, Lennon and McCartney cryptically addressed each other in lines from their songs. Several lines from “Too Many People” were seen as snipes at John Lennon, like the line “Too many people preaching practices.” Paul: “[John had] been doing a lot of preaching, and it got up my nose a little bit.” The line “You took your lucky break and broke it in too” was also seen as addressing McCartney’s former writing partner with the lucky break referring to being a member of The Beatles and his breaking it in two about their breakup.

Lennon retorted on his next album Imagine with the scathing “How Do You Sleep.” The album also included a postcard photo in early pressings depicting a smiling Lennon holding a pig’s ears in the same pose as McCartney holding the ram’s horns on the cover of Ram.

The sessions for Ram also produced McCartney’s first solo single “Another Day,” as well as early versions of “Big Barn Bed,” “Little Lamb Dragonfly” and “Get On The Right Thing” which turned up on McCartney’s 1973 album Red Rose Speedway. McCartney released an all-instrumental version of the Ram album in 1977 under the pseudonym of Percy “Thrills” Thrillington.

Ram was roundly panned by the critics when it was released in 1971; however it has grown in stature over the years. I’ve always loved the album and it is still one of my all-time favorite records after all these years. As far as “musical comfort food” goes, this one has been a staple in my diet since it came out – very tasty, always reliable with plenty of room for multiple helpings. 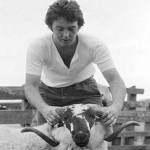 “Ram” is one of my all-time favorite albums…pretty close to the top of the heap in my estimation. I just listened to the newly released vinyl mono mix of this record today for the first time. The mono mix hasn’t been in circulation since its original release as a radio station promo back in 1971. It has now been reissued as a limited edition 180 gram vinyl pressing to as part of McCartney’s ongoing “Archive Collection” re-releases. It’s like meeting a friend that you are totally comfortable and intimately familiar with only to realize that there are nuances to their personality you never knew anything about. The differences between the stereo and mono mixes of this record are minor, however if you’ve listened to it pretty consistently over the last 40 years (like I have), you can feel them without being able to put your finger on what they actually are. As for this song, it’s still one of my favorites by Sir Paul. Its title was a bit of a pun since Paul used to go by the pseudonym Paul Ramon (Ram On) when he stayed at hotels, etc. He began performing this song on stage for the first time during his 2010 tour.

2020 and 2019: Thanks to everyone who continues to support us. The current licensing to legally play all the music you hear on Acid Flashback costs almost $2000 a year. Please help us defray this and other costs with a donation of any amount. … END_OF_DOCUMENT_TOKEN_TO_BE_REPLACED