You are here: Home / Archives for Ritchie Valens 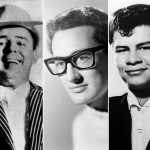 1959, 22 year old Buddy Holly, The Big Bopper and Ritchie Valens, aged 17, died in a crash shortly after take-off from Clear Lake, Iowa, the pilot of the single-engined Beechcraft Bonanza plane was also killed. Holly hired the plane after heating problems developed on his tourbus. All three were traveling to Fargo, North Dakota, for the next show on their Winter Dance Party … END_OF_DOCUMENT_TOKEN_TO_BE_REPLACED

Jiles “Jape” "JP" Richardson became a radio D.J. in 1952 and worked for ten years (with a two year break in the middle for army duty) at Texas radio station KTRM where he ultimately became their music director. While working at a sock hop, he decided to change his name to The Big Bopper after he witnessed teenagers dancing to a new dance called The Bop. Richardson wanted to … END_OF_DOCUMENT_TOKEN_TO_BE_REPLACED