You are here: Home / Archives for Sammy Davis

1966, Steve Marriott of The Small Faces collapsed while performing on UK TV show Ready Steady Go! The group were forced to cancel the following week's gigs. 1966, Big Brother & the Holding Company perform with their new lead singer, Janis Joplin, for the first time. 1967, In Woodstock, N.Y., Bob Dylan and the Band begin to record what will become known as The Basement … END_OF_DOCUMENT_TOKEN_TO_BE_REPLACED

It’s the wham of Sam, from the musical Bye Bye Birdie. Without Sammy Davis Jr., there wouldn't have been a James Brown or Prince. He was clearly the most talented of the Rat Pack by a mile...could sing circles around Frank and Dino...and had the moves and comedic talents to make him the total entertainment package. He was in a word, a dynamo! Davis was born into a family … END_OF_DOCUMENT_TOKEN_TO_BE_REPLACED 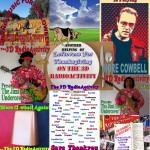 You may listen and say "wait a minute Uncle Marty,  didn't we just hear Take songs last week on The 3D RadioActivity?"  Yes, radio listeners you did, and on this episode we are playing songs that we didn't have enough time to play on our regular get-togethers!  Every program I search out the best or quirkiest tracks to use.  For instance, we heard 25 songs recently that … END_OF_DOCUMENT_TOKEN_TO_BE_REPLACED