You are here: Home / Archives for San Antonio Spurs 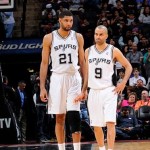 In a bit of NBA news that should surprise no one, the San Antonio Spurs are really, really good at basketball. After dismantling the hapless Sixers Monday night, the Spurs win-streak reached fourteen games. Over that stretch, the Spurs have beaten playoff teams such as Miami, Chicago, Portland, and Golden State by an average of 13.5 points per game. Their dominance this season … END_OF_DOCUMENT_TOKEN_TO_BE_REPLACED

Nolan Block and I continue on our quest to unveil each NBA team's New Year's Resolution. In Part 1, we looked at the underwhelming Eastern Conference. Part 2 looks into the Western Conference from bottom to top. Utah Jazz- Acquire a Franchise Player Nolan- On paper, the Utah Jazz are not the worst team in the league. They have assembled a team that looks like they are … END_OF_DOCUMENT_TOKEN_TO_BE_REPLACED

October is upon us, bringing about cool temperatures, pumpkin-infused everything and the start of the NBA season. It seems as if it were just yesterday that Ray Allen was backpedaling into the right corner to bury a game-tying three in Game 6 of the Finals. But since that moment, Miami won its second consecutive title, Doc Rivers departed Boston for sunshine and … END_OF_DOCUMENT_TOKEN_TO_BE_REPLACED