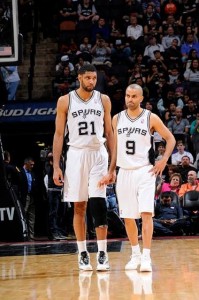 In a bit of NBA news that should surprise no one, the San Antonio Spurs are really, really good at basketball. After dismantling the hapless Sixers Monday night, the Spurs win-streak reached fourteen games. Over that stretch, the Spurs have beaten playoff teams such as Miami, Chicago, Portland, and Golden State by an average of 13.5 points per game. Their dominance this season is predicated on a perfect blend of basketball artistry and a system that exploits the weaknesses of their opponents. The Spurs, long deemed a “boring” team to watch, are the most aesthetically pleasing team to watch in the NBA today.

The Spurs are an offensive powerhouse. No player on the Spurs averages over 18 points per game, yet the team ranks seventh in scoring. No player averages more than 6.5 assists per game, yet the Spurs are first in assists per game. No player has gaudy statistics because everyone knows their role. Players like Marco Bellinelli, Boris Diaw, and Patty Mills thrive for the Spurs because they play in a system that emphasizes their respective strengths. For example, the Spurs have engineered their system to create open three-point opportunities in the corners. Marco Bellinelli, an excellent three-point shooter, has been put in the position to shoot these corner shots. He has taken advantage of this opportunity, hitting 46% of his corner three attempts.

In addition to taking advantage of the strengths of their roster, the San Antonio’s offense has used crisp ball-movement to dominate offensively. The Spurs are an unselfish team that is maniacal about creating the best scoring opportunity possible on every possession.Watch in this clip as the Spurs whip the ball around to generate an open look.

While the shot was missed, one can see how the Spurs adept passing can get the defense caught in problematic rotations. Their ability to move the ball is aided by a roster that features big men who are quality distributers. Tim Duncan and Boris Diaw are both above-average passing bigs. The Spurs can thus run an offense that takes advantage of Duncan and Diaw’s passing abilities to create scoring opportunites. San Antonio’s offense features a lot of off-ball cutting action. As you can see in this clip, the Spurs will use one of their bigs in the high-post to pass to open cutters.

San Antonio’s passing prowess creates open looks that increase offensive efficiency. The Spurs are the best three-point shooting team in the league at 39.8%. They also have the second highest true shooting percentage at 57.4%. The Spurs’ offensive percision and potency leaves opponents searching for ways to slow them down. To this point, no one has discovered the formula.

The Spurs ultimate success relies on several players who are advanced in age. Consequently, Head Coach Greg Popovich will probably elect to sit certain players before the playoffs begin, likely bringing an end to the streak. Still, one does not need to rely on a winning streak to realize how dominant the Spurs can be. Streak or no streak, the Spurs have established themselves as the elite team in the NBA.