You are here: Home / Archives for Something For The Girl With Everything

Something For The Girl With Everything 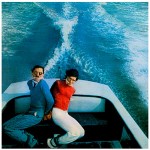 Sparks emanated from Los Angeles and cut their first two Todd Rundgren-produced records in Woodstock, New York for the Bearsville record label. The brothers Mael (Russell the flamboyant lead singer and Ron, the keyboard player with the Hitler mustache) were one of Rundgren’s first production projects on the records “Sparks” (originally titled “Halfnelson” which was the band’s original name) from 1971 and “A Woofer In Tweeter’s Clothing” from 1972. Both records tanked on these shores, so the brothers broke up the band, moved to England, got on the glam bandwagon and formed a new band. In a musical world inhabited by David Bowie, Mott The Hoople, Lou Reed, The New York Dolls and Queen, they caused a sensation across the pond with songs like “This Town Ain’t Big Enough For The Both Of Us,” “Talent Is An Asset” and “At Home At Work At Play.” In 1974, they brought their act back to these shores where they became cult favorites. They would go on to work with dance music pioneer Giorgio Moroder on their 1979 “#1 In Heaven Record,” score a 1983 hit with “Cool Places” recorded with Jane Wiedlin from The Go-Go’s, and record countless records for countless labels. They are still together today and tour occasionally…but hardly ever in America. With over 20 albums under their belt, Sparks are the glam fad that just wouldn’t go away…

2020 and 2019: Thanks to everyone who continues to support us. The current licensing to legally play all the music you hear on Acid Flashback costs almost $2000 a year. Please help us defray this and other costs with a donation of any amount. … END_OF_DOCUMENT_TOKEN_TO_BE_REPLACED