1964, The Who played at the Glenlyn Ballroom in Forest Hill, London. 1965, The Rolling Stones kicked off an 8-date mini-European tour at The Odeon Theatre in Glasgow, Scotland, supported by The Hollies 1966, "Substitute" by The Who peaks at number 13 on the German charts. 1967, Guitarist Peter Green quit the John Mayall Band. He went on to be a founding … END_OF_DOCUMENT_TOKEN_TO_BE_REPLACED

1967, The Bee Gees appeared live on the UK TV show As You Like It. The group were promoting their debut single "New York Mining Disaster 1941." 1968, Quicksilver Messenger Service and The Hallucinations performed at Boston Tea Party in Boston, Massachusetts. 1969, The Who stage the Hollywood premiere of Tommy, performing the rock opera at the Hollywood Palladium as part … END_OF_DOCUMENT_TOKEN_TO_BE_REPLACED 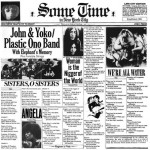 1964, The Beatles arrived in Adelaide, Australia and were greeted by an estimated 250,000 fans, who lined the ten mile route from the airport to the city center. The group gave their first four shows in Australia at the Centennial Hall, Adelaide over two nights, playing: I Saw Her Standing There, I Want To Hold Your Hand, All My Loving, She Loves You, Till There Was You, Roll … END_OF_DOCUMENT_TOKEN_TO_BE_REPLACED

1966, The Rolling Stones started a two week run at No.1 on the singles chart with "Paint It Black," the group's third No.1 single. 1966, European radio stations mistakenly report that The Who's lead singer Roger Daltrey is dead. Actually, it was guitarist Pete Townshend who had been injured in a car accident a few days earlier. 1966, Elvis Presley begins shooting his 26th … END_OF_DOCUMENT_TOKEN_TO_BE_REPLACED

1966, Steve Marriott of The Small Faces collapsed while performing on UK TV show Ready Steady Go! The group were forced to cancel the following week's gigs. 1966, Big Brother & the Holding Company perform with their new lead singer, Janis Joplin, for the first time. 1967, In Woodstock, N.Y., Bob Dylan and the Band begin to record what will become known as The Basement … END_OF_DOCUMENT_TOKEN_TO_BE_REPLACED