You are here: Home / Archives for Top Albums of 2012 by Eric Berman 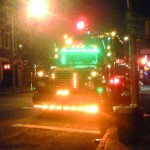 1. Deerhoof: Breakup Song (Polyvinyl) Emanating from San Francisco (Greg Saunier & John Dieterich) by way of Japan (Satomi Matsuzaki), Deerhoof have released 12 albums of unpredictable music with a sound that would have made Yoko Ono proud and John Lennon jump for joy. It has finally come to pass that the ingredients of Yoko Ono’s recordings circa “Double Fantasy” that … END_OF_DOCUMENT_TOKEN_TO_BE_REPLACED