You are here: Home / Archives for Tower of Power

1965, Working at Abbey Road studios in London, The Beatles recorded the rhythm track "You're Going To Lose That Girl" in two takes. On his new song, John Lennon sang, and accompanied himself on acoustic guitar, backed by Paul and George.  The band lip-synced to the recording for the movie Help!  The final album mix was made four days later. 1965, The Who learn by letter that … END_OF_DOCUMENT_TOKEN_TO_BE_REPLACED 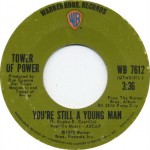 Song of the Day by Eric Berman - "You're Still A Young Man" by Tower Of Power They took us "Down To The Night Club" in "Bump City" and showed us "What Is Hip"...yet today’s Song Of The Day by Eric Berman doesn't get much more soulful than this! Tower Of Power was the East Bay California horn-fueled brain child of Emilio Castillo and Stephen “Doc” Kupka who are as renowned … END_OF_DOCUMENT_TOKEN_TO_BE_REPLACED