You are here: Home / Archives for Trade Deadline 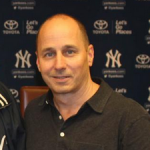 Yankees  GM Brian Cashman spoke to the mostly New York media following the trade deadline.  The AL East first place failed to make any more deals beyond the acquisition of Mariners utility player Dustin Ackley for for Ramon Flores and Jose Ramirez on Thursday. "We stayed engaged with all clubs to come up with a match that would improve our club" stated club General Manager … END_OF_DOCUMENT_TOKEN_TO_BE_REPLACED

Jason Hammel’s struggles on Sunday only highlighted the Cubs need for a beefier rotation.  The young Cubs were swept by the MLB worst, Philadelphia Phillies.  Mr. Prolonged Relief, Travis Wood has been the temporary fix, certainly a good tool to have in the arsenal.  Operating with a four-man rotation, the Cubs are clearly in need of starting pitching, according to multiple … END_OF_DOCUMENT_TOKEN_TO_BE_REPLACED