You are here: Home / Archives for Wichita Lineman 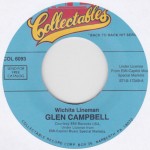 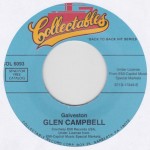 Glen Campbell’s long, storied career is Forrest Gump-like in its nature. He was a member of The Champs, who sent the hit “Tequila” up the charts (before he joined them). He was also part of The Wrecking Crew, the West Coast studio elite session musicians who played on literally hundreds of hits during the 1960s by the likes of Frank Sinatra, Ricky Nelson, Dean Martin, The Monkees, The 5th Dimension, Jan & Dean, The Beach Boys and Elvis Presley, to name but a few. He was also a touring member of The Beach Boys replacing Brian Wilson on the road in 1964-5, and playing on the group’s masterpiece Pet Sounds.

He’s a recording artist in his own rite that has sold millions of records and won countless Grammy, Country Music Association and Academy Of Country Music Awards. He’s also a member of the Country Hall Of Fame and was a popular TV host of his own Glen Campbell Goodtime Hour variety show whose connections in the music industry allowed him to feature top-shelf musical guests including The Beatles (on film), The Monkees, Neil Diamond, Linda Ronstadt, Johnny Cash, Merle Haggard, Waylon Jennings and dozens of others. He was also a movie star who shared the screen with John Wayne in the film True Grit.

Today’s jukebox classic is a double-shot of Jimmy Webb-penned classics performed by Glen Campbell. The A-side of today’s jukebox single (if you can actually delegate A & B sides to two songs this strong) is “Wichita Lineman,” a million-selling #3 hit from 1968.  The song was written by Jimmy Webb who also wrote classic sixties hits like “By The Time I Get To Phoenix,” “Up-Up And Away” and “MacArthur Park.”

Webb’s inspiration for the song came from a drive he took through the telephone pole-lined roads of Washita County, Oklahoma. As he passed through an endless stream of telephone poles, he noticed a single county lineman in the distance working atop one of the poles. He saw the man as a picture of loneliness, which got him reflecting back on a failed relationship he had with a woman who also served as the inspiration for his song “MacArthur Park.” Webb placed himself on top of the pole speaking into the telephone receiver for the song.

Webb: “I’ve never worked with high-tension wires or anything like that. My characters were all ordinary guys. They were all blue-collar guys who did ordinary jobs…They came from places like Galveston and Wichita and places like that…I (had) a very specific image of a guy I saw working up on the wires out in the Oklahoma panhandle one time with a telephone in his hand talking to somebody. And this exquisite aesthetic balance of all these telephone poles just decreasing in size as they got further and further away from the viewer – that being me – and as I passed him, he began to diminish in size. The country is so flat, it was like this one quick snapshot of this guy rigged up on a pole with this telephone in his hand. And this song came about, really, from wondering what that was like, what it would be like to be working up on a telephone pole and what would you be talking about? Was he talking to his girlfriend? Probably just doing one of those checks where they called up and said, ‘Mile marker 46,’ you know. ‘Everything’s working so far.'” (Song Facts)

The song’s orchestral swells were created by Al DeLory to reflect the shimmering sound of the wind “singing through the wires” atop the poles. The musicians playing on the track were all Wrecking Crew stalwarts including Campbell, Al Casey and James Burton on guitar, Carol Kaye on bass, Jim Gordon on drums and Al DeLory  on piano. It has been covered by the likes of Tom Jones, Johnny Mathis, Robert Goulet, Andy Williams, Bobby Goldsboro, Engelbert Humperdink, Jose Feliciano, Sergio Mendes and Brasil ’66, James Taylor and R.E.M.

On the flip is Campbell’s take on an anti-war song that Jimmy Webb wrote while hanging out on the beaches of Galveston, Texas.  It came to Campbell’s attention via Hawaiian singer Don Ho, who recorded a version of the song that was released as the flip side of his “Has Anybody Lost A Love” single in 1968. When Ho appeared on Campbell’s Goodtime Hour TV show in 1969, he gave him a copy of his recording of the song and suggested that he give it a whirl in the studio.

When Campbell recorded the song, he changed the lyrics, replacing the line “Wonder if she could forget me, I’d go home if they would let me, put down this gun and go to Galveston” with “I still hear your sea waves crashing/as I watch the cannons flashing/ I clean my gun/And dream of Galveston.”

Campbell’s version climbed to #4 on the Billboard Pop Charts, and topped the Country and Easy Listening charts in 1969. It also sold over a million copies. “Galveston” was the title track of his 1969 album of the same name which topped the Country Charts and charted at #2 pop. Like his previous album, the musicians included such Wrecking Crew stalwarts as Campbell and Al Casey on guitar, Hal Blaine and Bob Felts on drums, Jo Osborne on bass and Dennis McCarthy on piano.

Currently Campbell is battling Alzheimer’s disease. After completing his final album, he took to the road this past summer one last time before retiring for good.

2020 and 2019: Thanks to everyone who continues to support us. The current licensing to legally play all the music you hear on Acid Flashback costs almost $2000 a year. Please help us defray this and other costs with a donation of any amount. … END_OF_DOCUMENT_TOKEN_TO_BE_REPLACED