You are here: Home / Sports / Baseball / The Pitts-burger and the Doubleheader 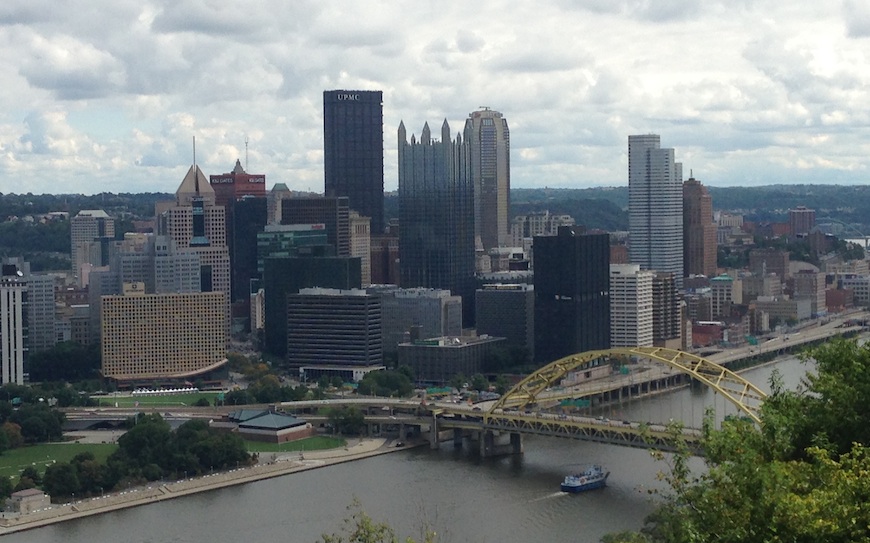 Last weekend I traveled to the Steel City for the first time in nearly thirty years. A few weeks ago, at the invitation of a good friend, I was offered an opportunity to attend the Steelers- Bears game that took place this past Sunday night.

Having never been to the new Heinz Field, I vowed to make this trip happen. When I saw that the Pirates were also at home, it became a no brainer.  What sports fan hasn’t heard about what a great ballpark PNC Park is? That would also allow me to add to the list of baseball stadiums I have visited (see below.)

The Pirates are in the midst of their first winning season since 1992, when Andy Van Slyke, and a pre-steroids Barry Bonds roamed the outfield at Three Rivers Stadium. Sunday’s game versus the Cincinnati had a lot of playoff implications.

I arrived late Saturday afternoon at the city’s vast airport, amidst a heavy drizzle, one that hung like a damp blanket over the city.  I remember how hilly the place was from my last visit, but forgot that there are bridges (and a few tunnels) everywhere. Apparently, Pittsburgh has more bridges than anywhere else in the world, except for Venice. Alas, the Queen of the Adriatic has no major league teams. They don’t even have a soccer club in Serie A, Italy’s top flight league. But I digress. 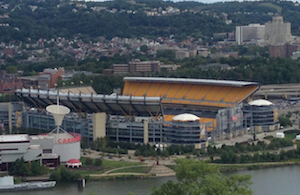 The skies finally began to relent as my host drove us towards downtown.  It had cleared up sufficiently for a mini tour of the areas surrounding Carnegie Mellon University, and the University of Pittsburgh, which proudly displays banners proclaiming its arrival in the Atlantic Coast Conference.  I also got to see where the last vestige of old Forbes Field, the center field wall, and a plaque commemorating Bill Mazerowski’s famous game seven winning home run in the 1960 Fall Classic.

Sunday, I got the full Pittsburgh experience, beginning with breakfast at Pamela’s Diner (pamelasdiner.com) in the Squirrel Hill neighborhood where my host’s childhood home is.  It was recommended that I get one of the house specialties, so I chose the Strawberry Hotcakes, which turned out to be an enormous crape-like confection, stuffed with fresh strawberries, brown sugar, sour cream, and topped with whipped cream. It was delicious, and filling, indeed. Calories, be damned.

Next, we ventured across one of the many aforementioned bridges to take in a scenic view of downtown from atop Mt. Washington, one of the neighborhoods in south Pittsburgh. 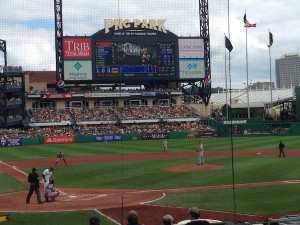 PNC Park sits across the Allegheny River from downtown. The Roberto Clemente bridge is closed to vehicular traffic on game days, so the streets are teeming with a carnival like atmosphere. We did end up eating ballpark food, large slices of pizza which were OK,  The park touts itself as an intimate, cozy venue, which did indeed have scenic views of downtown. There is a river walk which extends along the Allegheny westward towards Heinz Field.  Boats dotted the shoreline, in a most unusual display of tailgating.

Unfortunately, the home team pitching did not show up to play, although in reality the contest was over after the fifth batter, Jay Bruce cleared the bases with a double to the gap.  The Buccos never recovered, dropping the game, and their division crown chances in an 11-3 shellacking at the hands of the Reds.  By virtue of other teams’ losses, both clubs will still make the post season as wild cards. It remains to be seen who hosts the game.  The stadium experience there was everything it was cracked up to be. My only complaint would have been that the concourses on the main level were not very wide, and there were times when the human traffic resembled a typical afternoon on the Kennedy Expressway here in Chicago. 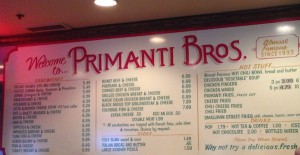 As thirty-nine thousand unhappy Pirate fans emptied out into the surrounding area, we scampered off to our next gastronomical adventure at Primanti Brothers in Market Square.  Their signature sandwich is the Pitts-burger Cheese Steak, a skyscraper of sandwich, with a beef patty on white bread topped with french fries, tomatoes, and cole slaw.  The only option is to add onions. The staff will scoff if you request it any other way. That, and the afternoon NFL games helped bide the time until we returned to the riverbank to head towards Heinz, with a pit stop at the Tilted Kilt, one of the largest of that chain’s venues I’ve ever been in.

The cheese steak was so filling, I felt no need to gorge on more stadium food at the Steelers game.  Walking around the much, much wider concourse at Heinz Field, we took in the Steelers Walk of Fame,  with tributes to many of the gridiron heroes of yesteryear, such as Terry Bradshaw, Jack Ham, Lynn Swann,  and Bobby Layne.  There are also displays commemorating the six Super Bowl victories by the franchise. Finally, we trucked up to our seats in the upper deck, albeit at the 45 yard line.  It is a very open air stadium. Fortunately, it was a pretty mild night. I bet it gets bone chilling cold in December.

What ever happened to Three Rivers you ask?  Well, it is now a parking lot and a retail area that serves the two new venues. 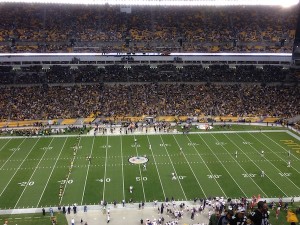 People were still partying in their boats, moored to the river walk, as we meandered back to downtown (past PNC) to retrieve the car and head home for the evening. There were lots of fans sporting Steelers jerseys, even at the baseball game.  Judging by what I saw, the most popular current player has to be Troy Polamalu. Number 43 jerseys were everywhere.  The were quite a few of the 1970’s Steelers vintage like Jack Lambert and Joe Greene.  Not too many Roethlisbergers were on display, though.  Hmmm.

Monday morning, I returned back home after my thirty-six hour odyssey.

Extra: List of major league baseball parks in which I have attended games:

No longer in use: