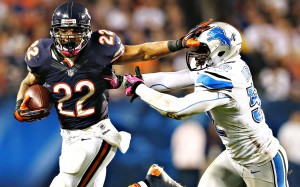 While the Chicago Bears new look offense has received most of the press, the Bears ball hawking defense has been up to their old tricks as they look to improve to their first 4-0 start in seven years. Not bad for a team who lost the face of their franchise in the offseason.

The Bears defense forced five turnovers in last Sunday night’s 40-23 win in Pittsburgh and helped pace the Bears with two defensive touchdowns. Major Wright returned an interception 38 yards for a touchdown and Julius Peppers also added a recovered fumble for a touchdown to put the nail in the coffin. The Bears have scored three defensive touchdowns in the last three games and have continued to win by forcing turnovers which has some drawing comparisons to the 2006 season.

However, the Bears defense will hope for better play from the defensive line. With a total of  five sacks combined for the first three games, the defense has struggled to get to the quarterback. Last week, the Bears lost starting defensive tackle Henry Melton for the season when he injured his knee against the Steelers forcing him to undergo surgery.

The Lions will not be easy to stop on Sunday as they boast one of the NFL’s most powerful offenses. Quarterback Matthew Stafford has thrown for 1020 yards in three games, and has improved on his decision making, throwing only two interception to his six touchdown passes. On the other end of Stafford’s passes will be the All Pro wide receiver, Calvin Johnson, who has caught 17 balls and contributed 3 touchdowns in this 2013 season.

The biggest challenge for the Bears defense this Sunday may not be the Stafford to Johnson connection, but the addition of Reggie Bush. This offseason has given opposing defenses fits and while he is a game time decision, you always have to plan for him.

“He is a talented back, not only does he run the ball well, he catches the ball and knows how to make defenders miss,” Lance Briggs said of Reggie Bush, who he has seen a lot of, stemming all the way back to the NFC Championship game when Bush was with the New Orleans Saints.

The Lions are not the only new look offense we will see Sunday as the Bears bring their new, high powered, Jim Trestman style offense to Detroit. Jay Cutler is having his best season with the Bears so far  and has almost looked rejuvenated with a new coach and offensive line.

When asked on Thursday what Trestman has brought to the Bears this season Cutler said, “He has given everyone on offense a lot of confidence, he believes in the system and has done a good job making sure guys get open.”

Brandon Marshall  has been Cutlers main target again this year hauling in 20 passes so far; Matt Forte has looked good and healthy averaging 4.1 yards a carry.

Whether it be a wild shootout or a defensive battle, you can bet the Bears and the Lions will be the greatest show on turf this Sunday.