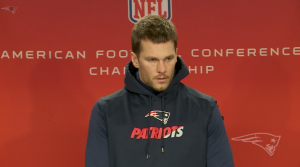 Our man in Atlanta, Dan Lynn gives us a preview of the NFC Championship game between the Packers and Falcons. Later, Jeff Rich chimes in on the AFC Championship between New England and Pittsburgh. Josh the intern gets grilled by Dave. Lastly, John Poulter, the professor of sports, closes out the show with a NHL update.