You are here: Home / Entertainment / Book Reviews / Book Review – Prog Rock FAQ (All That’s Left To Know About Rock’s Most Progressive Music) by Will Romano 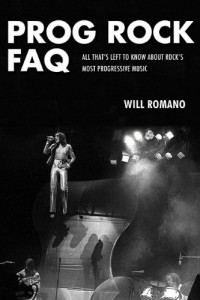 The sub-title says it all, as the first thing that struck me after a few chapters of this book was that this was not entirely an FAQ for neophytes, casual fans, or even those who imagine themselves to be “proggers” thru and thru. Those expecting a linear history of the evolution of the genre, with the major players prominently featured, will be for the most part disappointed. There is nothing chronological here at all, the introduction gives a current “state of the genre”, then delves into the true purpose of the book, which is to bring to light some of the forgotten/obscure/tragic figures of the movement. From there Romano doesn’t work his way backward, or start at the beginning, but rather gives the reader a collection of unrelated, save for the unifying thread of the genre, essays on various topics.

The FAQ title is not entirely without merit, as there are several chapters that do fall into the “frequently asked” category. Of particular interest is a history of the Mellotron, that distinctively prog keyboard that “made” so many of the classics of the genre (“Watcher of the Skies” and “Court of the Crimson King” come to mind immediately). Romano gives the usual description of the instrument as an unwieldy beast that would not stay in tune (if you need proof of that, take your ears no farther than the studio version of that classic rock warhorse “Free Bird”, this musician cringes every time he hears the 3rd verse), but then goes on to give the further history of the instrument as well as some insight into its manufacture. Other topics that lie squarely in the FAQ realm are a biography of the ultimate prog journeyman, John Wetton, the obligatory treatise of the fall from grace of the genre in the late 70s as the record labels dumped prog bands to sign punk and New Wave artists, and not one but two essays on cover art, which of course was an integral part of the prog experience in the 70s. These latter are particularly jarring in the Digital Age, as Romano describes the time and expense that went into manually creating many of the classic prog album covers, of course now they could be done on a PC or Mac very quickly and at little or no expense.

An honest review of this book must mention that a couple of the chapters are nearly unreadable, I forced myself to slog through them since I had committed to publishing a review. The chapter on “concept albums that aren’t” I found to take stretching a point to new extremes, as many of these albums have never been considered concept albums by anyone I know or have read. Romano’s writing style in this chapter is “early 20th century academic treatise”, i.e. very dry, and even, I hate to use this word but I must, pompous. The pomposity is found in further writings on long-form songs, and the occasional “nudge-nudge-wink-wink I know the real story of Joe Blow, but I can’t tell you”.  The dryness appears as well in a chapter on proto-prog bands of the 1960s, it feels like reading all those “begats” in the Old Testament. Fortunately the whole book is not written in this style.

A recurring theme in the book is the guitarist who left an up-and-coming band just prior to the band hitting it big, as the author writes about Mick Abrahams (Jethro Tull), Anthony Phillips (who left Genesis prior to their prog-rock success with Peter Gabriel), Steve Hackett (who left the same band prior to their pop success with Phil Collins), and the late Peter Banks (Yes). Some of these artists are completely satisfied with how their lives and careers turned out, others not so much.

The “All That’s Left To Know” part comes into play with articles on somewhat-familiar bands such as Univers Zero, Van der Graaf Generator, and Happy The Man, and a history of the RIO (Rock In Opposition) movement. Bands that are obscure to even the most die-hard fanboys (and girls) are described with great zeal, these include District 97, Dimensionaut, and Scale The Summit. To American fans, even the more well-known Italian bands such as Primiata Forneria Marconi (PFM), Banco Del Mutuo Soccorso, and Le Orme are somewhat obscure, Romano takes a step further into the depths with discussions of two “lost classics” from Italy, the albums Zarathustra by Museo Rosenbach and Opera Prima by Paolo Rustichelli and Carlo Bordini.

The nice thing about living in the YouTube age is you can actually listen to almost all of this music as you read about it, to do that back in the day, you would have had to send your money to one of those sketchy mail-order houses with the Xeroxed catalog (with colored construction paper cover of course) and keep your fingers crossed that you would get an album in return. While this is probably not the book to give to your 13-year-old progeny that you are trying to expose to the music you or your parents loved as a teenager, if he or she takes a liking to Jethro Tull, Emerson, Lake and Palmer, Genesis and Yes, then this would make a great follow-up gift (and you could sneak a read to learn more about your favorite genre).