You are here: Home / Sports / Cubs pay the price for offensive woes in 2018 NL Wild Card

Baseball is a symphony.

When the winds, the strings and the percussion sections of a symphony are harmonious, beautiful music results. But when thestrings are off, the whole performance is ruined

The Cubs’ symphony was almost perfect, but the silence of their bats cost them a rematch in the Divisional Round with the Milwaukee Brewers, as they fell to the Colorado Rockies 2-1 in the 2018 Wild Card.

Surprising? If this was back in May, yes. Saying the Cubs would play in the Wild Card then would have been heresy. The roster they assembled couldn’t possibly fall behind the Brewers. Heck, even in September such a proclamation would have gotten a double-take. They had a five game lead on the Crew at the beginning of the month. The bats got cold, though, and the Cubs found themselves in the Wild Card.

The Cubs hit 22 home runs in the month of September, the 28th most in the MLB.

World Series teams don’t do that.

And in the Wild Card round, their offensive woes continued.

Jon Lester was dominant, allowing only one run and four hits in six innings of work. The Cubs’ bullpen did its job as well, shutting out the Rockies for another six innings until the 13th inning.

But, as had been the case many times throughout the year, the offense couldn’t pull it together.

Rockies starter Kyle Freeland had been excellent all season, compiling a 2.85 ERA along the way. He owned the Cubs’ lineup and refused to give up a single earned run through six and two-thirds innings of work. Adam Ottavino, in relief, gave up a Javier Báez double to score Terrance Gore in the eight inning. But that would be the last Cubs’ hit of the night.

“I feel like we’re in a good position for the long haul,” Lester said. “This year sucks. This is a sting right now. But we got to find a way to still look at the positive of things, unfortunately.” 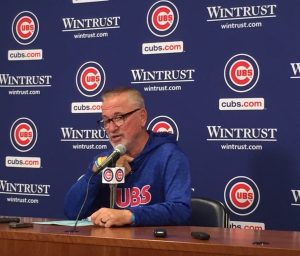 These struggles kept them from taking advantage of a great José Quintana start on Monday. They had their chances, but they ultimately couldn’t get runs on the board, and that’s just another reason they had to play Tuesday. These struggles kept them from winning more than one good outings from their starters, and just one of those would have vaulted them to the NL Central throne and into the divisional round.

Instead, they had to play a tiebreaker and a Wild Card, and watched two different teams celebrate on their home field in two days. They put forth two runs and nine hits in 22 of the most important innings of their season.

“We need to figure that out in the offseason, next spring training,” manager Joe Maddon said.

The solutions to these problems don’t come with a simple answer. The ‘FIRE MADDON’ movement will grow with this ending, but he isn’t the one hitting into rally-killing double plays. He isn’t the one striking out with runners in scoring position. He managed the game well, putting in pitchers who performed exactly as he planned. This isn’t a problem that can be attributed to one face. It’s a collective inability to execute that needs to be fixed next season. Báez spoke on their skipper after the loss: “We love our manager.”

The National League was wide-open this year, and with all the excitement free agency brings, who knows what the league’s makeup will be. Nobody knows what the next acquisition for the Cubs is, or if there is even one to be made. What we do know is there is a problem on offense. The Cubs played 39 games of only scoring one run or less this season, trailing only the Orioles who have 40. Identifying a problem is half the battle. Now they have to figure out how to address it.

As the saying goes, there’s always next year.