You are here: Home / Sports / College Football / Michigan vs. Northwestern

The best part of the Michigan-Northwestern game for fans was the singing of National Anthem by Chicago Blackhawks vocalist Jim Cornelison.

A pair of teams sitting at 2-3 in the Big Ten, squared off in Evanston today and their records were indicative of how they played. With both teams underachieving during their 2014 campaigns, Michigan was able to edged Northwestern, 10 – 9 in a sloppily played game. 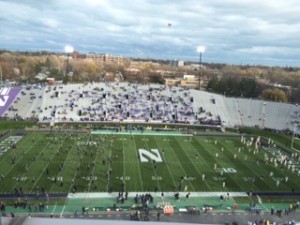 Neither team ran a play in their opponents red zone until the 2nd quarter, where the Wolverines were aided by a Jake Ryan interception of Trevor Siemian near midfield. Michigan was able to break the 20 yard line early in the 2nd but immediately turned the ball over on downs as De’Veon Smith was stuffed on his 4th and 1 attempt.

Northwestern had issues of their own, as penalties and special teams made mistake after mistake going into the half. NU punter Chris Gradone, muffed a snap on his own 24 and was only able to get off a 20 yard punt, setting up Michigan on Northwestern’s own 44.

No worries though for the Wildcats, as Michigan promptly went three and out, but was able to punt the ball to the NU one yard line. NU was unable to get the ball out of the shadows of their own goal posts and had to punt again.

There seems to be a theme developing.

After back to back interceptions by Devin Gardner and then Trevor Siemian, the Wolverines lined up for a 41 yard field goal to take a 3 – 0 lead going into the half.

It was blocked. Nil – Nil at half.

I found myself sitting next to a scout from the Tennessee Titans during the intermission, he was more confused than I was after the first half of play and was uninspired by the players on the field. I asked him if anyone stood out to him, he smiled and simply said, “Let me answer that after the game.”

The terrible play continued after the half, as Michigan fumbled on their opening drive, setting up the Wildcats on the MICH 23. NU gained three yards in 3 plays to set up a 37 yard field goal for Stephan Buckley.

The Titan’s scout turns to me and says, “I have to catch a train.”

All alone now… with faint grumblings from Les Grobstein in the background, NW gets stuffed on a 4th and 2 which gives the ball back to Michigan. Michigan goes all Michigan again, with another three and out near midfield.

The turning point in this pillow fight came when Tony Jones muffed the ensuing punt and the Wolverines jumped on the loose ball.

It only took 2 plays and 21 yards for MICH to score the first points of the day on a Smith 3-yard run. The only bright spot for the Wildcats was an Ibraheim Campbell 79 yard interception return, which set up his offense on the MICH 15 yard line. The first time in the red zone and a real opportunity for the NU offense to capitalize on their field positon. One sack, one intentional grounding penalty and -29 yards later, the Wildcats had to punt on MICH 44. 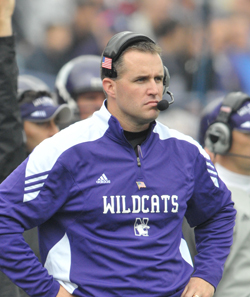 An offensive explosion occurred in the last 8 minutes of the game as Northwestern FINNALY put 3 points on the board in the middle of the 4th quarter to cap 19 play, 95 yard drive on a Mitchell 21 yard FG.

Michigan answered with a 37 yard FG on the ensuing possession to extend their lead to 10 – 3.

The Wildcats were able to march down the field in 3:07 to score a touchdown on a perfectly placed pass from Siemian to Jones for the 3 yard score. Going to be all tied up after the extra point and heading to overtime…. Right?

Coach Fitzgerald was not about to go to overtime 3 times in arrow against the Wolverines, considering his team has lost the previous two meetings.

The 2 point conversion play summed up the night for both of these teams, as Siemian tripped and fell to the ground as he was rolling out to attempt a pass. Siemian laid on the ground helpless, as the Michigan faithful erupted in cheer for their teams’ pitiful victory.

The Wildcats will have to win out to be bowl eligible as they hit the road for a game at Notre Dame next week. Notre Dame is coming off a disappointing outing against Arizona State in which Everett Golson had 4 interception in their 55 – 31 loss.