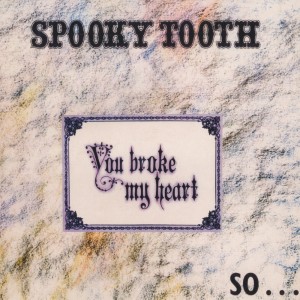 Spooky Tooth are one of those bands that are more notable in hindsight than they were in their heyday, due to the accomplishments of their alumni. Greg Ridley (Humble Pie bassist), keyboardist John Hawken (First 2 incarnations (pre-Annie Haslam) of Renaissance), guitarist Mick Jones of Foreigner, and Gary Wright of “Dream Weaver” and “Love is Alive” fame, all spent time in the group. Jones and Wright play on today’s song, from the group’s 5 studio album You Broke My Heart So I Busted Your Jaw (an inspection of the album cover reveals that title is not misogynistic).

The group never achieved the success the aforementioned members gained with their post-Spooky endeavors, with only their second album Spooky Two and You Broke My Heart receiving any sort of acclaim. I remember hearing today’s song on my hometown “alternative rock” station back in 1973 when the album came out, but never heard any of their other albums/songs until years later when they were a historical curiosity due to the fame of the former members. This song is typical of their sound, as one would expect, given Wright’s presence, they leaned towards hard-driving, organ-fueled riffing, a style that was quite popular in that era (think Deep Purple and Uriah Heep). The genre was called “heavy”, which this song certainly is. Enjoy.