You are here: Home / Music / Classic Rock / Song Of The Day – “Ride My Llama” by Neil Young 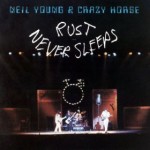 This “extraterrestrial folk song” from Neil Young & Crazy Horse’s 1978 tour and resultant 1979 “Rust Never Sleeps” album really hits my sweet spot. The song was recorded live at The Cow Palace in San Francisco, like most of the tracks from the “Rust” collection. It has a haunting chord progression with a prickly guitar arrangement that comes enveloped in cavernous room ambience, giving this tiny acoustic gem a huge feeling. Add to that, an unreal set of stream-of-consciousness lyrics – “I met a man from Mars, he picked up all my guitars and played me traveling songs. And when we got on ship he brought out something for the trip and said, “It’s old but it’s good.” Like any other primitive would.” – and you end up with a wondrous listening experience in just a little over two minutes. I could never really put my finger on what makes this song so great, but it truly is.