You are here: Home / Music / Alternative / Song Of The Day – “Nutted By Reality” by Nick Lowe 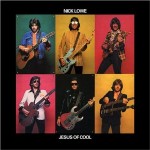 Here’s some “Pure Pop For Now People” which is the American name for Nick Lowe’s 1978 debut solo record titled “Jesus Of Cool” in England. The American and English editions of the record featured different covers with an array of images of Nick Lowe dressed in different types of garb, and both editions sport different track listings. When reissued in 2008, the record was rightly retitled “Jesus Of Cool” all over the world and combined all of the tracks from both editions in a new sequence. Lowe was marketed as a burgeoning new artist who was part of the late ‘70s Punk and New Wave music explosion, however he’d been recording records since the late 1960s with British pub rockers Brinsley Schwarz. “Jesus Of Cool” sports an array of styles including hard rockers (“Music For Money”), New Wave (“So It Goes”), pub rock (“Heart Of The City”), sugar-coated pop (“Marie Provost” – a song that deals with a starlet who died and was found partially eaten by her dog) and this Motown-flavored disco-fied gem that abruptly shifts direction in the middle, as if the song (as well as its protagonist) was also “Nutted By Reality.” After leaving the Schwarz in 1975, Lowe became the in-house producer for Jake Riviera’s newly-formed Stiff Record label, where he also began recording with Dave Edmunds’ Rockpile. In fact, if you look closely at the cover to “Jesus Of Cool,” one of the photos of Nick Lowe is actually Dave Edmunds dressed up as Nick Lowe. While with Stiff, Lowe produced Elvis Costello’s first five albums and The Damned’s debut album, and at the same time began recording records under his own name. Over the years Lowe has scored hits on his own like “Cruel To Be Kind,” and has written hits for others including “What’s So Funny ‘Bout Peace Love And Understanding” for Elvis Costello, “The Beast In Me” for Johnny Cash (who was his father-in-law for a time) and “I Knew The Bride (When She Used To Rock and Roll)” for Huey Lewis and the News. During the 1990s, he formed the super group Little Village with John Hiatt, Jim Keltner and Ry Cooder, who recorded one record and toured the world before disbanding. He has continued to release records throughout the years and today writes and records intimate pop records along the lines of Nat King Cole.