You are here: Home / Music / Alternative / Song Of The Day by Eric Berman – “Answering Machine” by The Replacements 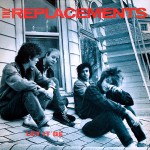 When they were good, they were really great. But when The Replacements were bad, they were truly awful. Seeing The Replacements in concert was always a crap shoot. Whether it was boredom from being on the road, or just youthful blowing off steam, you never really knew what you were going to get when you went to see the “Placemats.”

Heck, I saw them five times during their heyday, and I think they were really good only twice. I’m not sure if that makes me a sucker for punishment, or just addicted to the greatness that I did witness when they did come to play.

Once I saw them at the Beacon Theater in New York City and they were so drunk, they couldn’t even finish a song. Somehow, they’d gotten access to a helium tank and they spent a good part of their ‘set’ sucking on helium balloons and singing in high pitch voices. Most songs they performed that night were incomplete, and members of the audience threw toilet paper rolls at the band, which they gleefully threw back at us. This went on for more than an hour before they left the stage to a chorus of boos.

That said, the band could be great in concert, and often were. The couple times that I saw them truly on, they were focused as they gave an incendiary performance of some of the best-written songs of the late ‘80s and early ‘90s, courtesy of Paul Westerberg.

It was the dawn of alternative music. While the rest of the world listened to Madonna’s Like A Virgin, Bruce Springsteen’s Born In The U.S.A. and John Mellencamp’s Scarecrow, a whole new thing was brewing in the music scene as bands like REM, The Smiths and Meat Puppets began releasing albums that didn’t fit into the prevalent classic rock radio format. No, these records were played only on college radio stations giving birth to a new radio format, college rock or alternative music, that would catch on in a big way in a few years’ time.

When Let It Be by The Replacements came out in 1984, it was one-third of a “holy trinity” of groundbreaking albums that included Husker Du’s Zen Arcade and The Minutemen’s Double Nickels On The Dime that literally changed the way we listened to music. While each group came out of the punk era and held onto the punk aesthetic especially in their early recordings, these albums added the element of craftsmanship to the songwriting that set them apart from all the rest.

With the release of Let It Be, Paul Westerberg’s songwriting began to evolve. What was once loud and brash became nuanced and tuneful, as the band began to venture away from the non-stop hardcore punk rock rave-ups they dabbled in, in favor of more arranged songs like “Unsatisfied,” “I Will Dare” and today’s Song Of The Day “Answering Machine.” These songs were far better constructed, had thoughtful lyrics and terrific melodies that allowed the band to branch out into more varied instrumentation.

The rest of the band included Bob Stinson on guitar, baby brother Tommy Stinson on bass and Chris Mars on drums, who really began to congeal as a unit on stage and in the studio, especially when left to their own devices on rockers like “Seen Your Video” and “We’re Coming Out.” It was no secret that the Stinson brothers truly disliked Westerberg’s forays into down-tempo material like “Androgynous,” preferring to rock out at all times.

On one level, Westerberg wanted to be taken seriously as a songwriter, even if he and the band continued to bait audiences by playing off-the-cuff covers and goofing around on stage. And this album contained its fair share of levity in songs like “Gary’s Got A Boner,” “Tommy Gets His Tonsils Out” and on their tossed-off Kiss cover, “Black Diamond,” that let the fans know that hey, things hadn’t changed too drastically and that they were still just a lovable punk band trying to take the piss out of their fans.

Let It Be was also the band’s last independently released record before jumping ship from the Twin Tone record label to the majors. Once they went with the majors, the overall quality of the songwriting dipped as the production values became slicker. Their first album for Sire, Tim, was indeed a stunner, but after that few of the group’s albums have held up well over time.

Paul Westerberg has said Let It Be was “our way of saying that nothing is sacred, that the Beatles were just a fine rock & roll band. We were seriously gonna call the next record Let It Bleed.”¹