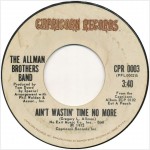 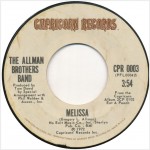 Out of a period of tumult and disaster came the ultimate prize: utter greatness…

By 1971, The Allman Brothers Band were feeling the first blushes of success after having released two studio albums that went nowhere and a live album recorded at The Fillmore which broke the band big. As a result, several members of the band including Duane Allman and Berry Oakley found themselves very rich and very addicted to heroin.

The band began recording their next studio album cutting tracks for “Blue Sky,” “Stand Back” and “Little Martha” at Criteria Studios in Florida before a stint in rehab became necessary for Berry, Allman and a few of the group’s roadies. Unfortunately, tragedy struck the day after Allman checked himself out of rehab on October 29th, 1971 when he was involved in a fatal motorcycle accident back home in Macon, Georgia. Not only did Allman’s death call the new record into question, but the fate of group’s survival also became questionable.

The band decided to carry on by doing what they did best, heading back out on the road. During the stint on the road, Dickie Betts took on the role of lead guitarist and group leader before the group headed back into the studio in December of 1971 to finish work on their next album. The album, Eat A Peach was a double that was half studio recordings and half live recordings featuring the last recorded performances of Duane Allman. The album also included both songs from today’s jukebox single.

“Melissa” was originally recorded in 1968 by one of Gregg and Duane’s early bands called 31st Of February (which also included Butch Trucks, Scott Boyer and David Brown). Their demo recording featured Duane’s first use of bottleneck slide guitar on record, however after committing it to tape; Gregg sold the rights to the song to producer Steve Alaimo for $250, the price for an airline ticket from Los Angeles back home to Macon, Georgia.

Gregg Allman on “Melissa”: “I wrote that song in 1967 in a place called the Evergreen Hotel in Pensacola, Florida. By that time I got so sick of playing other people’s material that I just sat down and said, ‘OK, here we go. One, two, three – we’re going to try to write songs.’ And about 200 songs later – much garbage to take out – I wrote this song called ‘Melissa.’ And I had everything but the title. I thought (referring to lyrics): ‘But back home, we always run… to sweet Barbara’ – no. Diane…? We always run… to sweet Bertha.’ No, so I just kind of put it away for a while. So one night I was in the grocery… and there was this Spanish lady there and she had this little toddler with her – this little girl. And I’m sitting there, getting a few things and what have you. And this little girl takes off, running down the aisle. And the lady yells, Oh, Melissa! Melissa, come back, Melissa!’ And I went, ‘Oh – that’s it.’ I forgot about half the stuff I went for, I went back home and, man, it was finished, only I couldn’t really tell if it was worth a damn or not because I’d written so many bad ones. So I didn’t really show it to anybody for about a year. And then I was the last one to get to Jacksonville – I was the last one to join the band that became the Allman Brothers. And my brother sometimes late at night after dinner, he’d say, ‘Man, go get your guitar and play me that song – that song about that girl.’ And I’d play it for him every now and then. After my brother’s accident, we had 3 vinyl sides done of Peach, so I thought well we’ll do that, and then on the way down there I wrote “Ain’t Wastin’ Time No More.” I wrote that for my brother. We were all in pretty bad shape. I had just gotten back from Jamaica and I was weighing at about 156, 6-foot-1-and-a-half – I was pretty skinny. So we went back down there, got in the studio and finished the record. And the damn thing shipped gold.” (San Luis Obispo Tribune 11-30-06 via Songfacts.com)

The song was performed by Gregg at Duane’s funeral since it was one of Duane’s favorite songs. It was also one of the first songs recorded by The Allman Brothers Band after Duane’s death. The group’s manager, Phil Walden ultimately bought back the rights to the song before the group committed it to tape for Eat A Peach.

The flip of today’s single is the reason it was chosen for the jukebox. “Ain’t Wastin’ Time No More” is the consummate southern rocker and the opening track to the Eat A Peach album. The music was composed by Gregg Allman before his brother’s accident, while the lyrics, dealing with Duane’s passing and veterans coming home from the Vietnam War, were written immediately following his death. Much of the song was composed on a 110-year-old Steinway piano in Studio D of Criteria Studios in Miami, Florida.

The Eat A Peach album ultimately rose to the #4 position on the album charts upon its release in 1972. The Allman Brothers Band lineup at the time was the classic lineup of Duane Allman on guitar, Dickie Betts on lead guitar, Gregg Allman on vocals and piano, Berry Oakley on bass, Jai Johanny Johanson on drums and Butch Trucks on drums.

The title for the Eat A Peach album came from a quote by Duane Allman who was asked by a reporter what he was doing to help the revolution: “I’m hitting a lick for peace — and every time I’m in Georgia, I eat a peach for peace. But you can’t help the revolution, because there’s just evolution. I understand the need for a lot of changes in the country, but I believe that as soon as everybody can just see a little bit better, and get a little hipper to what’s going on, they’re going to change it. Everybody will — not just the young people. Everybody is going to say, ‘Man, this stinks. I cannot tolerate the smell of this thing anymore. Let’s eliminate it and get straight with ourselves.’ I believe if everybody does it for themselves, it’ll take care of itself.” (Wikipedia)

Today, The Allman Brothers Band still exist and still perform their annual residency at The Beacon Theater in New York City. However, this year Greg Allman dropped out of the last few shows due to illness.

#100! “The Jukebox Series” focused on the 80 records that currently inhabit my 1963 Seeburg LPC1 jukebox. I’ve had my jukebox (or as I like to call it “the prehistoric iPod”) for a little over twelve years and in that time I’d like to think that I’ve perfected the mix of 45s within. Over the years, records have come and gone out of the ranks of the juke, but they were all at one time juke-worthy. I’ve decided to expand “The Jukebox Series” to include many of the “juke-worthy” records that are no longer currently in the mix, but at one time inhabited a coveted slot.