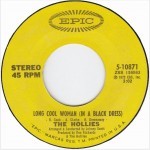 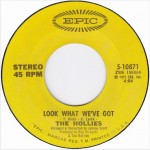 By the time today’s jukebox classic hit the charts in 1972, The Hollies were already on their second career having survived the setback of having two key members leave the group. Throughout the sixties, they released indelible singles like “Bus Stop,” “Stop Stop Stop,” “Look Through Any Window,” “Carrie Anne” and “Jennifer Eccles” before original member Graham Nash left to join David Crosby and Stephen Stills to form CSN.

By the time of this #2 single in 1972, the band changed record labels (from Epic to Polydor) after original member Allan Clarke left. In fact, today’s single lacks The Hollies’ patented harmonies because the track was originally intended to be a Clarke solo recording. The rest of the band gave Clarke an ultimatum that he could either remain a member of the Hollies or have a solo career, but not both.

Clarke: “I think with me the band feared that if I got a hit I’d leave. How can you stop destiny? Now, if they originally agreed, I might not even have left. ‘Long Cool Woman’ would have been released a year earlier, and we’d have done a few tours of the States and maybe would have been really big.” (Rolling Stone via Songfacts.com)

The song was written in about five minutes time by Clarke with Roger Cooke and Roger Greenway who both also wrote The Seekers’ hit “I’d Like To Teach The World To Sing.” The group was intentionally paying homage to Creedence Clearwater Revival who had disbanded around the time of the recording session, and Clarke based his vocals on CCR’s recording of “Green River.”

Clarke ultimately opted to leave the band and go solo, and as was standard practice back then, their old record label dug up “Long Cool Woman” from the Distant Light album which had been out almost a year in the UK but was not released in the US until after Clarke’s departure. The song was released to compete with the Hollies’ first release for Polydor Records featuring Clarke’s replacement Mikael Rickfors.

“Long Cool Woman” climbed all the way to the #2 position on the charts selling over two million copies worldwide making it the group’s best showing in the US. Personnel on the album included Allan Clarke on lead vocals and guitar, Tony Hicks on guitar and vocals, Terry Sylvester on guitar and vocals, Bernie Calvert on bass and Bobby Elliot on drums. The album shot up to the #21 position on the charts based on the performance of today’s jukebox classic and its follow-up single “Long Dark Road,” which charted at #26.

The band were able to participate in yet another chart renaissance with hits like “The Air That I Breathe” (featuring Elton John on piano) after the group’s two Polydor albums sank without a trace here in the states, and Allan Clarke rejoined the group in 1973 (forcing Rickfors out).

The group recorded and released their last album for Epic Records in the US in 1975 featuring a cover of Bruce Springsteen’s “4th Of July, Asbury Park (Sandy)” which went nowhere as a single. Shortly thereafter, Epic Records gave up on the band in the US, although they continued to release material in the UK and tour. They were inducted into the Rock ‘n’ Roll Hall Of Fame in 2010 and the current line-up of Tony Hicks, Bobby Elliott, Ray Stiles, Ian Parker, Peter Howarth and Steve Lauri continue to record and tour today.